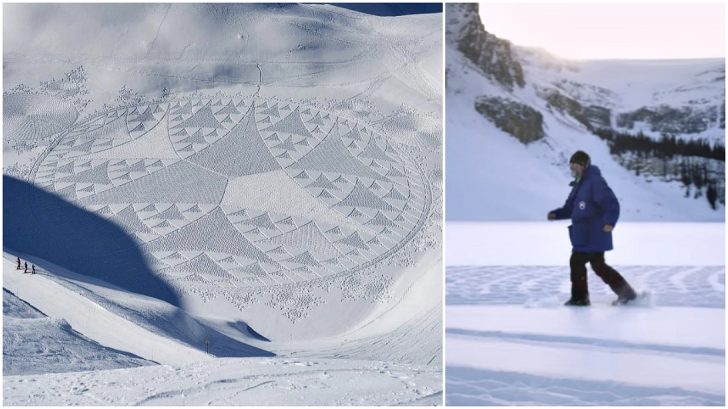 12 years ago, Simon Beck combined his love of adventure, exercise and art to create a form of expression that has brought him attention worldwide. With only his imagination and a pair of snow shoes, the 60-year-old travels the world to create art pieces in untouched fields of snow.

Simon Beck was born in London in 1958 and graduated from Oxford University with a degree in engineering. He went on to pursue a career in cartography, the study and practice of drawing maps, inspired by his love of the sport of orienteering (a competitive outdoor race that involves mapping and mountaineering).

“I just liked running through forests,” Beck said. “And, I like mountaineering, so it was a natural activity for me.”

In 2009, he was ready for a change of pace…literally. After spending a number of winters at the Les Arcs ski resort where the French Alps were his playground, Beck became an avid snowshoer and decided to use the activity as a creative outlet. Using the untouched snow as a blank canvas, Beck walked for hours to create intricate patterns in the snow, often creating artwork for resorts in exchange for free ski gear or passes.

Eventually images of his masterpieces began to show up online, making Beck a celebrity of sorts as he began to receive requests for custom snow art from all over the world. In total, Beck has created more than 300 snow art pieces, often patterned after items found in nature, mathematics, crop circles and famous artists like Vincent van Gogh. The average piece takes roughly 12 hours to complete, although some take much longer.

“Beck has carved giant fractals into the Minnesota Twins’s snow-covered baseball field, a wolf at Lake Louise in Alberta, Canada, and a ‘twisted six-pointed flower’ at Utah’s Powder Mountain,” according to Artsy. He has also been featured in National Geographic and numerous other media outlets for his work.

Check out photos of some of Simon Beck’s work in the photos below. And check out his Facebook page for more stunning aerial photos and clips of his work in both snow and sand.