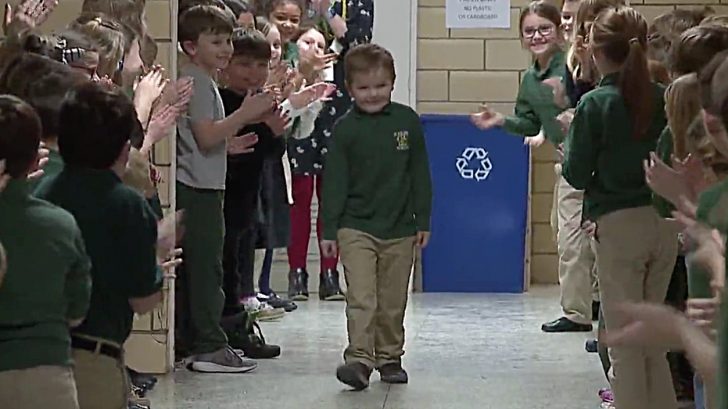 6-year-old John Oliver Zipay from Newbury, Ohio was greeted with a standing ovation as he walked down the halls of his school celebrating his final round of chemotherapy.

It was seriously the most adorable, tear-jerking story of the day, seeing all the kids smile and cheer for him as he humbly walked past everyone. Witnessing the love and support his classmates, teachers and family had for him was an uplifting moment for everyone involved.

CBS 17 reported that John was diagnosed with acute lymphoblastic leukemia on November 1st, 2016, and has been battling it for 3 years straight now. Since then, he’s spent 18 days in the hospital with many years of chemotherapy sessions.

“He had a meta-port in his chest so he wasn’t able to do any physical activity for three years. So it was hard for him, had to sit back for gym class and things,” his parents told CBS.

Even so, he never fell behind on his grades, Principal Patrick Gannon said. Everyone was really just glad to have him back in class. After walking down the hall they continued to celebrate John, showing a video montage of his years of battling cancer and winning.

Fortunately, he finally defeated it and can get back to the things he loves, like learning about planes and the WWII era. His family says he’s an old soul and is really excited to start traveling now that the doctor gave him the okay.

“You want that for your child, to grow up and get dirty and play outside and have fun and we kept him in a bubble so we’re excited. Looking forward to the future and having our little boy back,” his mom Megan Zippay said.