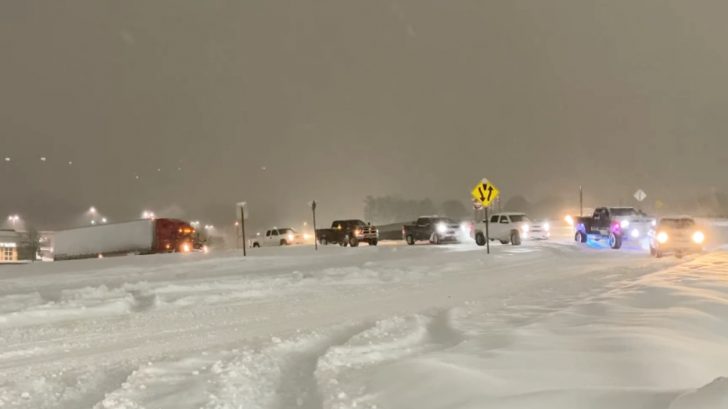 A group of heroic pickup truck drivers may have just given truck brands an idea for their next commercial.

Over the past week, much of the South saw an unprecedented amount of snow. Many states saw road conditions quickly deteriorate as the winter weather pushed through, which caused many vehicles to become stuck in the snow and ice.

In Little Rock, Arkansas, a semi-truck lost traction after its back tires veered off the road while encountering another vehicle lodged in the snow. Fortunately for the driver, a band of pickup trucks came to the rescue.

Bystander Stephanie Cole shared a clip of the incident on Facebook, which shows six pickup trucks working together to pull the semi-truck up a hill. The trucks used chains to steer the semi out of harm’s way. In the video, the trucks slid and threw snow in the air as they struggle to complete their mission. In the end, the trucks finally gain enough traction to pull the 18-wheeler uphill. Cheers are heard as the drivers inch their way to success.

Watch the full clip in the video below.

Due to winter weather, many people were forced to abandon their vehicles in the snow. Learn how to get your car unstuck in the next video.