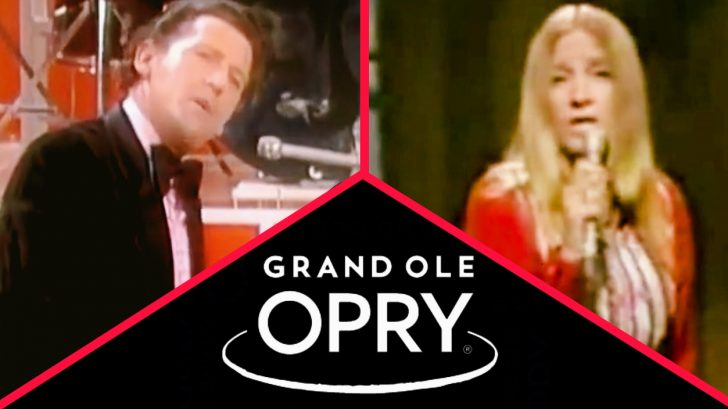 Past Stars Once At Odds With The Opry

For decades, most country music singers have all powered through their careers with the same goal in mind…to sing on the Grand Ole Opry stage. Beyond that, artists aspire to one day prove their worth to the Opry so they can join its elite list of members.

The Opry has welcomed a number of new inductees in recent years, including Crystal Gayle, Dustin Lynch, and Chris Young.

But some past Opry members and performers have gone against its wishes, and in doing so, have found themselves banned from its famous stage.

Over the course of its extensive history, the Opry has only banned a small number of artists. You likely won’t be surprised to hear the names of some of the banned artists…but others will come as a shock.

We’re going to run through those names in this list, so check them all out below!

While “The Killer” is a rock and roll artist at heart, he has been an honored member of the country music community for years. So it only made sense when, in January 1973, he was invited to perform at the Opry.

Author Colin Escott explains in the book A Half Century of Hits that Lewis agreed to the performance despite having a sour taste for the Nashville community:

“Lewis was never truly accepted in Nashville,” Escott wrote. “He didn’t move there and didn’t schmooze there. He didn’t fit in with the family values crowd. Lewis’ family values weren’t necessarily worse, but they were different.”

Wanting to rebel against those values, Lewis took to the Opry stage and broke one of its cardinal rules when he cursed just a few minutes into his performance.

He then broke another huge rule by playing a 40-minute set, when at the time artists were restricted to playing just two songs.

To top it all off, Lewis was asked not to play any of his rock and roll tunes, but he completely ignored that request.

While the Opry never technically banned Lewis, that performance certainly didn’t go over well. That performance marked the first, and last time he ever played there.

The reason behind Dierks Bentley‘s ban from the Opry may be one of the most surprising on this list. Unlike the other artists we’ll mention, Bentley’s Opry ban was actually handed down before he became a famous singer.

So how did Bentley manage to get in the Opry’s bad graces if he had never performed there before? Well, before his career took off, he worked as a researcher at a TV station called The Nashville Network.

Country singer Dierks Bentley once worked in the videotape library for The Nashville Network, soaking up tradition… http://bit.ly/dzfYSc

Since he worked close to the Opry, Bentley would often sneak over there once he was off work and would find his way backstage to hang out with the artists who showed up.

The Opry eventually caught on to what Bentley was doing, and made him leave, telling him to never come back. But his ban didn’t last for long.

After Bentley became famous, the Opry wasted little time in recognizing his talent, and asked him to become a member in 2005.

As one of the leading stars of her era, it was no surprise when Skeeter Davis was asked to become a member of the Opry. But what did come as a surprise is that she was once banned from performing there for an entire year.

The reason why? She decided to speak her mind after police arrested 11 members of Bill Lowrey’s “Christ Is The Answer Crusade” when they marched through Nashville days prior to her Opry appearance on December 8, 1973.

Davis made it clear she wasn’t a fan of the officers’ actions, and spoke her mind prior to her Opry performance, saying the following:

“This is really something that I should share. I didn’t ask our manager, but they’ve arrested 15 people just for telling people that Jesus loves them. And that really burdened my heart, so I thought I would sing you all this song.”

The Opry felt that Davis went too far, and suspended her membership in addition to banning her from performing.

But the ban was lifted a year later, and she came back to perform many times until she made her last Opry appearance in 2002.

While Neko Case is primarily known for her work in the rock genre, some of her work has been influenced by country, folk, and Americana. The Opry apparently felt she had a strong enough connection to country music in 2001, which is when she was invited to play at the Grand Ole Opry Plaza Party.

The outdoor concert took place in July, and if you’ve ever been to Tennessee in July, you know how hot it can get. It made matters worse that the stage was black and a barbecue pit was right next to it.

Mid-performance, Case felt that the heat was starting to get to her, and asked for some water or a the chance to take a short break. But her requests were denied. Growing dizzy and fearing she was about to suffer a heatstroke, a desperate Case removed her top in an attempt to cool down.

Even though Case was still wearing her bra, the Opry was not a fan of her actions. They banned her for life, and to date, she is the only living artist under a lifetime ban from the Opry.

You likely aren’t surprised to hear that “The Man in Black” was once banned by the Opry. In fact, his Opry ban may be the most famous of all featured on this list. It was even portrayed in a scene in the hit biopic about his life, Walk the Line.

Cash was the first member inducted into the Opry in 1956, and frequently returned to the venue. But just nine years later, he found himself banned from ever playing there again.

What was the reason? Well, Cash had a bit too much to drink prior to one show in 1965, and ended up bashing out the stage lights with a microphone stand in a fit of rage. The Opry didn’t have a favorable opinion of his behavior, and handed down a ban.

Cash was kept away from the Opry for three years, but was eventually welcomed back.

He quickly found himself back in their good graces, as he was enlisted to start hosting its television specials just one year after his ban was lifted.

If you’ve been a longtime country music fan, Hank Williams‘ dismissal from the Opry is likely something you’ve heard about before. But have you ever heard the reason why the country music icon had his membership suspended and never reinstated?

Everyone knows that Williams dealt with many addictions throughout his life. His struggle was not a private one, he was previously fired from a radio station job in 1942 after showing up to work under the influence on more than one occasion.

It was for that same reason that the Opry banned Williams and suspended his membership in 1952.

Been thinking about this all day. Whoever campaigns on making Dolly's birthday a national holiday and getting Hank Williams reinstated to the Grand Ol Opry gets my vote in 2020.

When he did turn up to perform (he frequently missed shows with no explanation), he was often under the influence. The Opry was unwilling to tolerate such behavior, which is why they bid “farewell” to him when they did.

He died just a few months later, and ever since, fans have begged for the Opry to reinstate his membership. Although they never have reinstated Williams, the Opry frequently recognizes his music and legacy, spotlighting those who cover his songs, including his own granddaughter, Hilary.

There you have it folks…those are a few artists who have been banned from the Opry for a whole array of wild reasons.

You may have heard about Williams’, Cash’s, and maybe even Lewis’ bans, but what about some of the others? Who were you most surprised to see on this list?