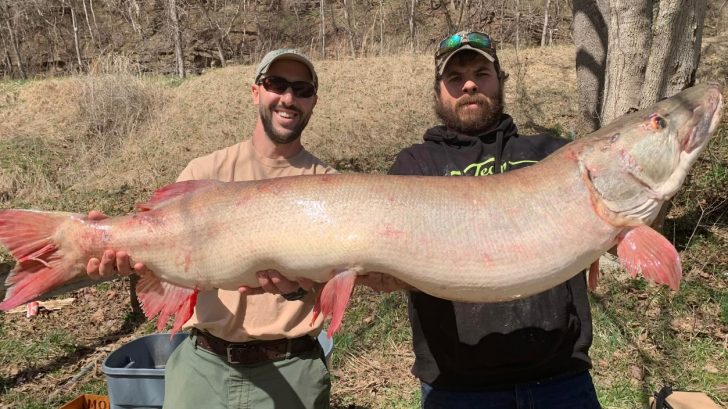 The massive fish was a whopping 11 pounds above the previous state record, coming in at 55 1/16” long and weighing 51 pounds.

The previous was 53.5 inches long and 34.6-pounds caught by Joe Wilfong out of the Little Kanawha River in 2017. At the time, Joe beat the record by 5 pounds, with his catch being about 14 percent bigger.

Assistant district fisheries biologist for the West Virginia Division of Natural Resources, Aaron Yeager, drove out to verify the fish, along with muskie fishing guide, Chase Gibson, who had already caught a monster muskie earlier that day.

After taking the official measurements, Luke took a couple of photos and posted them to Facebook honoring his catch and the men who helped him out with it.

“This morning my dream came true. I caught the new WV state record musky for both length and weight. She was 55 1/16” long and weighed 51 pounds on certified scales. Thanks to Aaron Yeager for coming and verifying my fish, and Brady Lewis Daniel Hoard for helping keep her alive in the net and Becky Jackson for bringing my bump board from the house. Released back into the water,” Luke wrote.

According to fishing experts, catching a musky is one of the most difficult freshwater fish to catch. They are known to be the “fish of 10,000 casts” because it usually takes 50 hours of fishing to catch a legal-sized muskie.