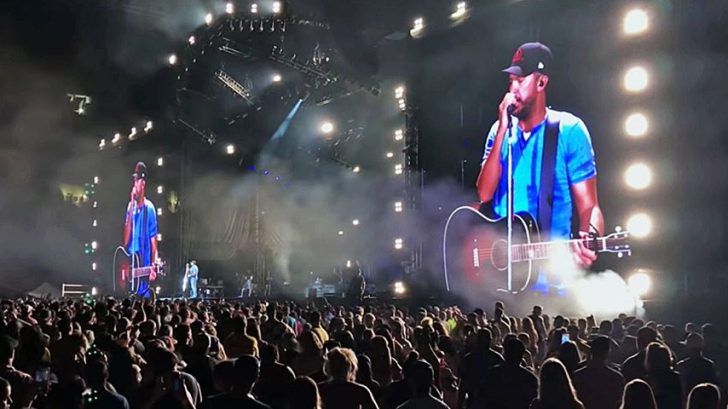 If you caught a glimpse of the teenage singer-songwriter Luke Bryan invited onto the stage recently during a stop on his What Makes You Country XL tour, the young lady may have looked familiar.

The crowd-pleasing guest is no stranger to the stage and has a voice that would make you believe she was born to entertain. Maybe she was.

During a stop in Pittsburg, PA on Saturday, June 30, hometown hero Gabby Barrett, the American Idol 2018 second runner-up joined in the party and treated the overflowing crowd to one of her favorites, Journey’s “Don’t Stop Believin’.”

Before belting out her solo, Gabby warmed up by joining Luke in a rousing delivery of his hit song “Most People Are Good.” Though Gabby is accustomed to performing in front of thousands of strangers with a few familiar faces scattered about, this was a little different.

Barrett’s YouTube channel captured her nervousness as she prepared to face the thousands of hometown fans who came to see Luke Bryan and ended up getting a whole lot more.

When It Mattered Most

Once introduced, Gabby’s jitters faded and all that nervous energy was funneled into putting on an unforgettable performance when it felt like it mattered most. After all, who doesn’t want to do well on their hometown turf?

Heinz Field, THATS MY KINDA NIGHT! ? A crowd of 50,000. We did a duet, then he let me do a song by myself. Just me and y’all. Thank you so much ❤️ @lukebryan & thank you so much to everyone for making my dreams come true. FULL DUET and Solo song from tonight will be on YouTube TOMORROW! I have no more words.

On fire at Heinz Field, Gabby shared her delight with her Instagram audience.

“THAT’S MY KINDA NIGHT!? A crowd of 50,000. We did a duet, then he let me do a song by myself. Just me and y’all. Thank you so much (love) @lukebryan & thank you so much to everyone for making my dreams come true.”

Not Her First Time

This wasn’t the 18-year-old’s first time to sing “Most People Are Good” with country star Bryan. She also had an opportunity to sing along with Luke on stage during his premiere role as a judge on American Idol.

Where does young Gabby go from here? The rising star has no where to go but up. Really. How do you top appearances with the biggest and brightest stars?

Cast Your Own Light

You cast your own light.

One Gabby fan’s comment on social media pretty much summed up the experience,  “That had to be the best feeling ever when you heard everyone cheering for you when Luke said your name. Pittsburgh Proud!”

Now, sit back and listen to Gabby and Luke thrill the crowd with the reassurance that after all is said and done, “Most People (Really) Are Good.”