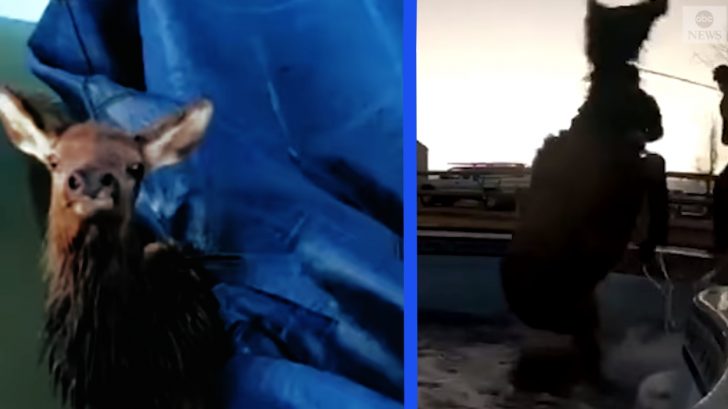 ABC News shared video footage of a 500-pound elk that had gotten itself stuck in someone’s backyard swimming pool in Loveland, Colorado. Local firefighters and wildlife officers were both called to the scene and they captured some awesome footage.

According to Colorado Parks and Wildlife, three wildlife officers joined forces with Loveland Fire Rescue Authority to help rescue a female elk that had accidentally jumped into a local’s backyard pool and she could not get out.

The pool was covered for the winter so the animal was not only stuck in cold water not knowing how to get out, but was struggling with the pool cover. A few firefighters and officers used a firehose to wrapped around the animal to lead it towards the stairs so it could get out.

“To get the elk out of this pool in Loveland, they got straps around her and then the wildlife officers and Loveland Fire Rescue Authority firefighters pulled her out. It took a few attempts to get her out,” Colorado Parks and Wildlife said, KDVR reported.

Once the 500-pound elk was helped out of the pool, she stood still for a few minutes to recover her strength before running off into the nearby woods. It was a wild experience for everyone involved. Take a look at the footage captured in the video below.