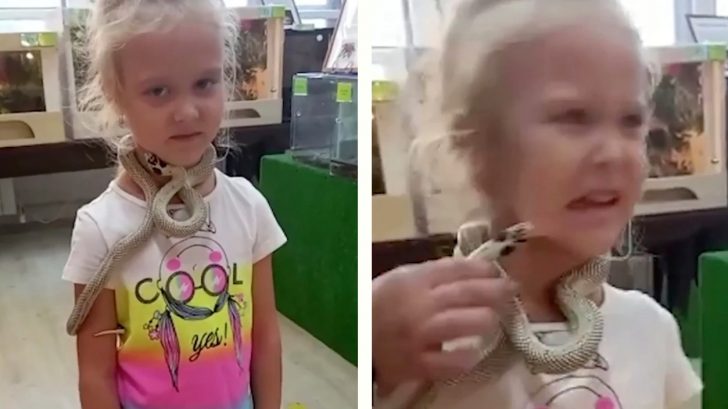 Five-year-old Viktoria was visiting the petting zoo in Russia when she was bitten on her face by a venomous snake that hails from East Africa.

Video footage showed little Viktoria interacting with a rufous beaked snake at the Butterflies Park petting zoo. She was with her family and the staff of the park when they wrapped the snake around her neck.

The predator reptile curled up towards the girl’s face and open its mouth to take a bite of the girl’s cheek. At first, she didn’t even realize it until the adults, shocked, saw what was happening and tried to pull the snake off her face.

As they did, the girl realized what was going on and tried to pull away from it but the snake was still holding onto her. It eventually let go and they removed it from her and immediately took her to the hospital.

“We called an ambulance and took the child to hospital to be examined,” Viktoria’s father, Vladimir, said, according to NewYork Post. “The zoo staff said that the snake does not attack people at all.”

According to the staff, they don’t know exactly why the snake attacked her, it has never attacked anyone else before and they only had a couple of other ideas of why it might have happened.

Before the 5-year-old handled the reptile, she had been playing with the petting zoo’s chicks and that may explain the reason for the bite. The girl had also reportedly eaten chicken before the interaction, so maybe the snake was smelling it on her breath.

“Snakes are very sensitive to smell,” reptile expert Ekaterina Uvarova explained. “If it was hungry and the girl smelled of prey like chicks, this might provoke the snake to bite her.”

Fortunately, the snake venom is mild and the bite is no more painful than the prick of a syringe. The girl received a facial bandage for the bite and is expected to be just fine.