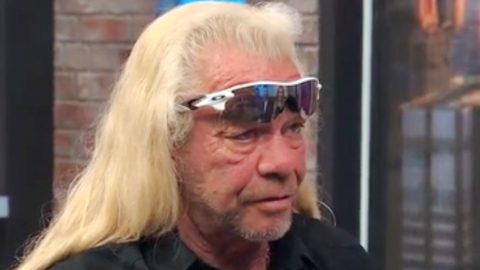 Less than a year after losing wife Beth Chapman to cancer at the age of 51, Duane “Dog” Chapman has found a new lady love in his life.

Though there were reports that the famous bounty hunter had already moved on – and moved in – with Beth’s good friend Moon Angell, that was not the case. Moon was just a close friend to Dog, and to prove it, the two went on the Dr. Oz show. Dog asked her to marry him on the spot with a fake proposal.

“And I didn’t tell ya I was gonna do this, but this is The Dr. Oz Show…and I think this will put a stop to a lot of this,” Dog said as he stroked his beard and thought about his next few words carefully. Turning to her with tears in his eyes, Dog said convincingly: “Moon Angell, will you marry me?”

Moon said she’s always loved Dog, but as a friend. After that appearance somewhat cleared the air that Dog hadn’t moved on yet, he is ready to reveal that he now has.

In a few quotes to The Sun, Dog the Bounty Hunter says he has been dating a woman named Francie Frane for a few months.

While speaking with The Sun towards the end of March, Dog dropped quite the bombshell:

This may come as a shock to fans, seeing as he has maintained he will never marry again. In a sit-down interview with People Now after Beth’s passing, Chapman opened up about if he would ever date again.

“I probably will do that, and I told [Beth] that,” he said. “What deal we said is I will never take ‘Beth’ off my chest, I have her name here. And I will never get married.”

Despite this claim, it seems that at the time, Dog heard wedding bells in his future with Francie, and the bounty hunter’s children actually approve.

No less than five weeks later, Dog and Francie announced their engagement.

Congratulations to the happy couple!

See more of what Dog had to say, and photos of the couple together below.