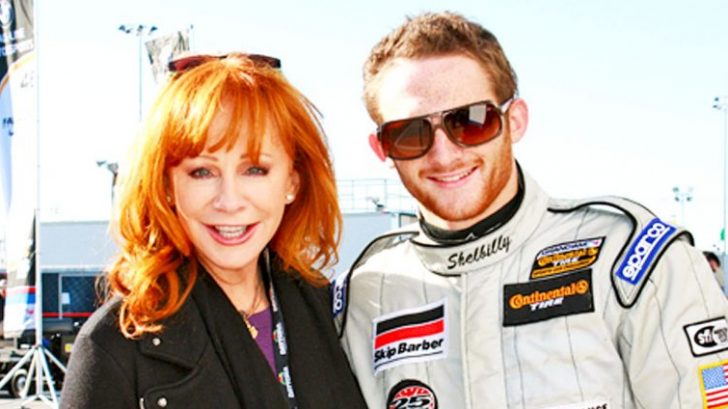 When Reba McEntire married her manager Narvel Blackstock in 1989, she automatically became the mother to his three children from his previous marriage. Two years later, on February 23, 1990, Reba and Narvel welcomed a son into the world, their first and only child together, Shelby.

Shelby was much younger than his half-siblings, and as Reba’s only biological child the two have always shared a special connection. He ended up going on tour with Reba and his father when he was young, and he helped out by working for his parents as well.

Over time, Shelby came to the conclusion that the music business wasn’t the right fit for him. Instead, he chose to pursue a career as a race car driver. Reba is often seen cheering him on at his races.

In honor of this extraordinary mother-son duo in country music, we’ve gathered together some of Reba and Shelby’s cutest photos and moments to share with you. Just click the button below to get started.

1. When Reba Welcomed Shelby Into The World

Although Reba loves her stepchildren, Shawna, Chassidy and Brandon, who is married to Kelly Clarkson, she admits that the connection between her and Shelby is the strongest. “Having that one kid from when you see them on the sonogram screen, it was me and him,” Reba told Nash Country Weekly.

Reba has been open about the difficulties she experienced during her pregnancy with Shelby. As she revealed, she actually had to be placed on bed rest at one point. But she would go through it all a thousand times over again, because Shelby was more than worth it to her.

“In my fifth month of pregnancy, I was in the hospital twice and had to be put on bed rest with a magnesium drip in my stomach,” she said. “And they said, ‘Was it worth it?’ And I said, ‘I would have hung by my toenails for this kid.’”

Although Shelby didn’t pursue a career in music, he is still extremely proud of Reba and has a great admiration for her work. In 2011, Shelby was by Reba’s side to help her celebrate a major accomplishment…her induction into the Country Music Hall of Fame in Nashville.

Reba was inducted into the Hall of Fame by Dolly Parton during a ceremony that took place on May 22, 2011. Shelby stopped to pose for some pictures with his mother, who despite her celebrity status, he says is like anyone else.

“Overall, she’s just your average, everyday person, to be honest,” Shelby told Nash Country Weekly. “She’s not any different. You could walk up to her and start a conversation. That’s just the kind of person she is and how she is, an overall loving person.”

As for Shelby’s favorite song of his mother’s? Like many others, his all-time favorite is “Fancy,” which he says is awesome to see Reba perform live.

“That’s definitely one song that seeing live is worth seeing just because it’s such a good show ending,” he said.

3. When Shelby Had His First Race

On January 28, 2011, Shelby raced in his first professional race at the Daytona International Speedway in Florida. Reba was there, and as you would expect, she was a nervous wreck. In fact, she even admits that she nearly fainted the first time she saw him race.

“I had my little Flip camera up and I watched them go by and all I could see was this little baby face of Shelby in that helmet. And my tour manager, Carolyn Snell, was with me. And when the green flag dropped, it was 83 cars, and I knew they had to funnel down to this one left-hand turn. When he flew by at 100 miles an hour, I just had to go sit down.“

Of course, Shelby ended up being just fine, and actually had a successful first race. Reba took to her blog to talk about the race later, bragging up her son like any devoted mama would.

“Shelby took the car from 25th place to 1st place at the end of his turn. Very impressive!…watching Shelby on the track racing at 170 mph was the biggest rush I’ve ever had!!…Congrats to Shelby on his first professional race!” she wrote.

4. When They Rang In The New Year Together

Following Reba and Narvel’s divorce, the start of 2016 marked the start of a new phase in Reba’s life. And who else would Reba chose to celebrate with than her beloved son?

On New Year’s Eve in 2015 Reba shared a photo of her and Shelby wearing their New Year’s party hats and smiling at the camera.

Even though Reba and Shelby have busy schedules, according to Reba’s Instagram the two of them manage to make the time to meet up with one another quite often. Of course, this shouldn’t come as a surprise from the two of them, since they are not only mother and son, but close friends.

5. When They Enjoyed Some Time At The Track

Shelby may be 27 now, but in Reba’s eyes he’s still her little guy.

When Shelby was still a little boy, Reba filmed a short video with him as they walked around a lake and played together. In the video, Reba spoke about her advice for Shelby as he grows up, saying “Mainly it’s the golden rule: treat other people the way you want to be treated. Be fair, be honest, make sure your word means something when you say it.”

You can watch the adorable video below.

Knowing the incredible man Shelby is today, we’d say he definitely listened to his mama’s advice.