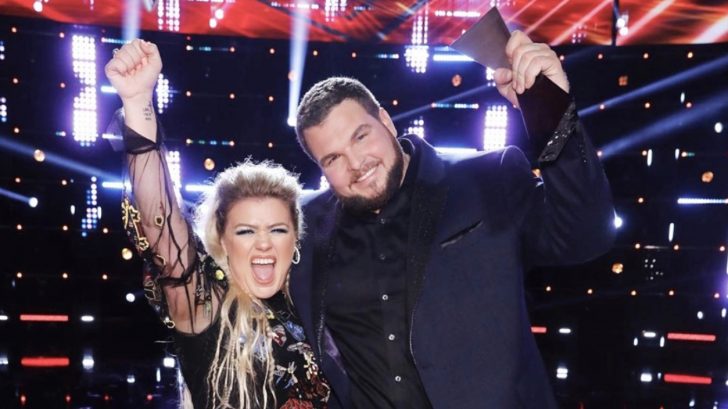 Although all four singers gave it their all, only one could be crowned the Season 17 champion of The Voice, and that person was Jake Hoot!

While Hoot was a frontrunner once the live shows began, he was only a one-chair turn during the Blind Auditions, landing on coach Kelly Clarkson’s team. Hailing from Cookeville, Tennessee, the 31-year-old stayed true to his country roots throughout the competition and performed songs originally by Trace Adkins, Lonestar, Reba McEntire, and Willie Nelson, just to name a few.

Because of the show, we have learned a little bit about him, but we’d love to dive deeper! Here are five things to know about Season 17 winner of The Voice, Jake Hoot!

Merry Christmas from the princess and I!

Hoot is a proud father to his 4-year-old daughter, Macy. He often posts about her on social media calling her his “princess.” She enjoys playing soccer and jamming with her daddy!

2. He Is Divorced – But Has Found Love Again

One of Hoot’s best performances of the season was during Night One of the two-night finale. Each contestant sang an original song, with Hoot’s titled “Better Off Without You.”

During rehearsals, Clarkson asked him how he connected to the song and he explained to her that it was about the heartbreak of his divorce.

“Going through a divorce, that was my lowest point,” Hoot admitted. “I was sitting there one night. I thought of the lyric, ‘I can see the thunder and hear the dark.’“

Even though his marriage didn’t end up the way he imagined it would, he became a father and since, has found love again. His girlfriend Bekah, who has a daughter named Hadley, accompanied him to his Blind Auditions and can be seen cheering him on from backstage.

He also posts photos from his adventures with Bekah, and their two girls.

3. He Lived In The Dominican Republic

Hoot was born in Texas to missionary parents. When he was nine years old, his parents moved their family (he is the second oldest of nine kids) to the Dominican Republic.

Im a couple days late, but I wanted to wish my parents a Happy 35th Anniversary!! They are the best parents/grandparents one could ask for! Love yall, @abhslh @doubletakesphotographytn !!

There, he learned to play guitar and sing, and also became fluent in Spanish! He was 20 years old when he moved to Nashville and began gigging.

After moving to Nashville, Hoot enrolled at Tennessee Tech University in 2011, where he was a walk-on on the football team, meaning he wasn’t recruited prior to him being a student at the university.

The university and his football program are super proud to have him as an alumni.

? Congratulations and #WingsUp, Jake! ?
Before @NBCTheVoice made @jakehootmusic famous, he was a winner right here on campus. He is an Interdisciplinary Studies graduate, a former Golden Eagle football player & a great ambassador. We are so proud of you! #TeamHoot #WeAreTNTech pic.twitter.com/QzYQHdDaE2

They invited him to lead the team out from the locker room, sing the National Anthem, do the coin toss, and perform a song during halftime at a game in October.

Tennessee Tech, thank you. I really cant say it enough! Never in a million years would I have imagined not only leading the Eagle Walk, but singing the National Anthem, doing the coin toss, AND getting to perform a song for halftime! It was a tough loss, but a day I will always cherish! Thank you to everyone who made it possible, Mark Wilson @mmdexter5 @sethbrew , to the Golden Eagle Marching Band, @freakydave985 and everyone else involved! So proud to be a Golden Eagle! WINGS UP!!! #ttufootball @ttugoldeneagles @tntechuniversity @tennesseetech_dance @tennesseetech_cheer #wingsup? @nbcthevoice #nbcthevoice #cookeville #tennesseetech #jakehootmusic #teamhoot

After he was crowned the winner, the Tennessee Tech Golden Eagles Twitter account wrote, “We’ve known he was a winner since 2011.”

5. He Used To Cover Songs While His Daughter Took A Bath

Many musicians know that the room in a house with the best acoustics is the bathroom. When you’re a aspiring musician and a single dad, sometimes you have to multi-task. That’s exactly what Jake Hoot did prior to trying out for The Voice.

While little Macy was taking a bath, Hoot would sit next to the tub and film himself performing a cover song. Every few seconds his eyes would dart from looking at the camera to looking at Macy in the bath, and you can hear her splish-splashing around.

He hasn’t posted what he calls “Bath Tunes” since July 10, so perhaps competing on The Voice didn’t give him time to do another one. If you look at his catalog of videos on his Facebook page, he has countless “Bath Tunes” sessions.

Congrats again to Jake Hoot on winning Season 17 of The Voice!