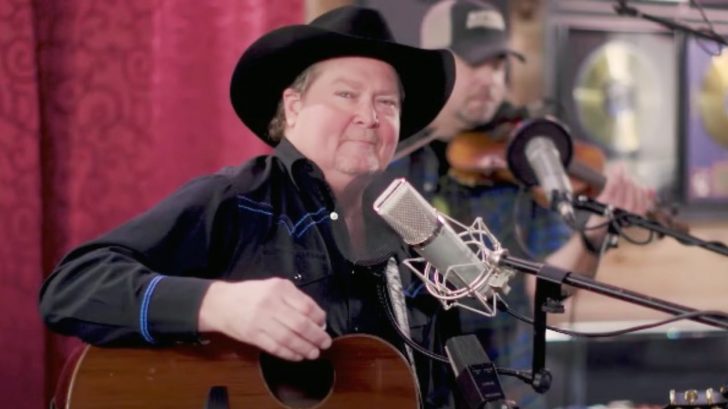 Just A Bit Of History

Born in Atlanta, Texas on January 27, 1968, Tracy Lawrence had been an ironworker and phone salesmen before he made the decision to try and start a music career. Lawrence was born with a passion for music, and wrote his first song when he was only four years old.

By the time he was 16, Lawrence was playing in his first band. But it would be years later before he finally left home for Nashville in pursuit of a career in country music. Over the course of time, Lawrence worked his way up the ladder, participating in talent shows in order to make a living.

Eventually, Lawrence’s hard work paid off when he released his debut album Sticks and Stones in 1991. After all those years, Sticks and Stones was the break that Lawrence needed, and it ended up peaking at the tenth spot on the Billboard Top Country Albums Chart.

In total, Lawrence has released 12 studio albums and has countless number one singles to his name. He remains active in the industry, and continues to perform shows around the country. His voice is one of a kind, and there truly is no one else out there in country music that sounds like him.

Lawrence and his voice have had a great influence on the industry, inspiring many of today’s popular country stars. Artists such as Jason Aldean and Luke Bryan often honor Lawrence at their concerts, playing some of his many hit songs.

If you consider yourself a true fan of country music, then there are a few songs of Lawrence’s you should know by heart. This list will show you which ones they are.

One of Lawrence’s earlier singles, “Texas Tornado” was released in 1995 off of his album I See It Now. The song was released as the third single off of the album, and eventually became Lawrence’s sixth number one hit.

“Texas Tornado” debuted at the 64th position on the charts and later made the climb to claim the top spot. In addition to being a hit in the U.S., the song also peaked at the number one spot on the Canada Country Tracks chart.

In the song, the narrator describes a lover of his as a “Texas tornado,” with lyrics such as “I’m like a tumbleweed in a Wild West Texas wind/You’re blowin’ me away again.”

During the music video for the song, Lawrence plays the part of a lovestruck Texas farmhand who falls for his employer. The video was featured in a sequence along with some of Lawrence’s other music videos, showing him “time traveling” between each song.

Even early in his career, Lawrence already knew how to make a hit, which he proved in “Texas Tornado.”

Written by country music songwriter and record producer Bobby Braddock, “Time Marches On” was the second single from Lawrence’s 1996 album of the same name. It was his fifteenth single to make its way onto the charts, and his longest-running number one, holding the top spot for a total of three weeks.

The song’s lyrics tell the story of a married couple who watch time pass by as their two children grow into teenagers and then adults. As the couple notes, the only thing that ever stays the same in life is the fact that “everything changes.”

The song is told from the perspective of a man looking back on the lessons he has learned in life. He opens by singing about a time he stole candy as a child, and how his father taught him a good lesson after that.

But more so than his father, the man’s life was influenced the most by the lessons his grandfather taught to him. He showed him how to play baseball, taught him how to drive a truck, and spoke to him about faith. As a child, the narrator didn’t listen, but as he reveals in the song, he wished he had:

“He spoke of life with a slow southern drawl.
I never heard him, ’cause I knew it all.
But I sure listened when I got the call,
That he was no longer there.”

Listeners were easily able to relate to the song’s simple, but deep message. Because of that, it remains one of Lawrence’s most-beloved songs.

4. “Find Out Who Your Friends Are”

In 2006, Lawrence released the lead single off of his album For the Love. Titled “Find Out Who Your Friends Are,” the song was written by Casey Beathard and Ed Hill. Surprisingly, it took five months for the song to enter the Top 40 on the Billboard country chart.

An alternate version of the song featuring Tim McGraw and Kenny Chesney was picked up by radio stations once For the Love was released. Once radio stations started playing that version, the song started a slow climb up the charts.

Lawrence immediately felt a connection to the song, and honestly, who wouldn’t? The lyrics describe a series of sticky situations, like getting your car stuck in a ditch. Lawrence sings that it is during such moments that “you find out who your friends are” by whether or not they show up to help you out.

Listening to “Find Out Who Your Friends Are” now, we have no idea why it took so long to hit number one!

Lawrence wasn’t the only artist to release “Paint Me A Birmingham” as a single in 2003. In fact, both Lawrence and fellow country singer Ken Mellons recorded a version of the song, and released them within weeks of one another.

In the song, the narrator comes across a man on the beach painting ocean scenes. The narrator asks the man if he can paint him “a Birmingham,” to portray the place he thought he was going to live with his now ex-lover.

The song is definitely one of Lawrence’s more emotional hits, which is perhaps what makes it one of his best as well.

Which of these songs is your favorite? They’re all so good, we can’t decide!