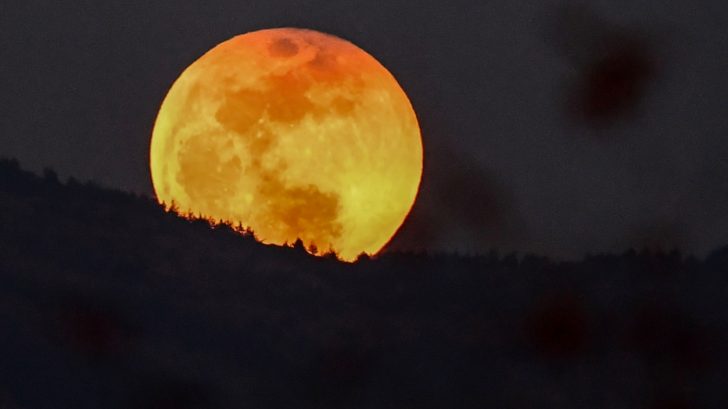 Even if it sounds fake, there’s no doubt you’ll hear howling in just a few days time when the Super Blood Wolf Moon rises over the skies and becomes a celestial event you can’t miss unless your eyes are closed.

Described as a “lunar trifecta” this crazy happening is something that doesn’t happen all the time – but when it does, you can bet your bottom dollar that all sorts of folks will be coming out for it.

What do you have planned for our upcoming stunning Eclipse? ~ My Cosmic Chat for our Super Wolf Blood Moon Eclipse is up | https://moonyogini.com/2019/01/16/cosmic-chat-super-wolf-blood-moon-eclipse/ #astrology #astroworld #cosmicchats #eclipse #superbloodwolfmoon #supermoon #higherconsciousness #energyworker #energyhealing #planetarymagick #witchyvibes #zodiac

What Exactly Is A “Super Wolf Blood Moon?”

Bringing the bright reddish glow to the night sky this Super Wolf Blood Moon is a crazy phenomenon that combines a supermoon, a blood moon, and a wolf moon. Some of you may have heard of these before, but just to clear it up here is what each of them is defined as, scientifically.

A supermoon is when a new or full moon coincides with the closest point to Earth during its orbit cycle. This is a monthly cycle and supermoons usually happen every 14 months (roughly).

“Blood moon” refers to the red color of the moon when it is in total eclipse. The reddish color comes from its relation to the sun. These will happen around twice a year.

The wolf moon is a term used to describe the first full moon of the year – named after wolves.

The moon will appear reddish-orange and appear super huge in the sky due to its proximity to Earth. This is the last time we will see a Super Wolf Blood Moon for the next 18 years – so it’s an important time for astronomers, astrologers, and superstitious folk alike.

This Sunday night, January 20th! A rare, #SuperBloodWolfMoon! Here are a couple pics I nabbed of last year's #SuperBlueBooodMoon. Get outside and check it out this Sunday! Full eclipse around 9:15pm PST. No special equipment needed—just the naked eye and clear skies! ?? #moon

The January 2019 Super Wolf Blood Moon will take place on January 20th / 21st for most people living in America and will last for an estimated 62 minutes. Be sure to check your local weather listings for exact details on when it will be visible in your area.

What Does It Mean?

To scientists, the Super Wolf Blood Moon is just a perfectly-timed celestial event that happens in a rotating period due to gravity and the orbits of our solar system. To many others, it means something significant. It could be different to many groups, but here are some interesting tidbits from sources around the web.

#Repost @astrologybylyra: Super Blood Wolf Full Moon – Sunday night/Monday Morning- Super because it's at it's closest point to the Earth; Blood because it will appear red and Wolf as it is the January Full Moon. This Full Moon is the last of the eclipses series we have had in Leo. ________________________________ Things are going to start getting, let's call it 'interesting', as we build up to the Full Moon Total Eclipse happening this Sunday a little after midnight (US EST). ______________________________ Full Moons are all about releasing the old and beginning new cycles, but this one is led up by the Sun going over the South Node, then squaring Uranus and Mercury conjuncting Pluto – really magnifying to us what needs to be let go of, new shifts in perspective and surprise plot twists. A positive element to this is that Venus is conjuncting Jupiter and trining Mars – meaning as one door closes another one open – as long as you are willing to completely shut the door to the past cycle that is leaving. Mars will luckily be squaring Saturn giving us the push to say enough is enough, and take action. ______________________________ As we ramp up to this Full Moon, take some time to reflect on what things in your life are repeating like a old broken record. What are you ready to change in your life? What has completed it's course and is blocking the path to your dreams? What part of you is saying "If only I didn't have this, I could focus on that?". Set your intentions that all will work out smoothly and for the highest good for all involved. Emotions could run high, but with a little reflection and preparation, we can avoid losing our heads, and redirect our attention to the wonderful new things coming in. Wishing you all a very Happy Super Blood Wolf Full Moon! ______________________________ #astrologersofinstagram #astrologyforecast #astrology #astroforecast #collectiveconsciousness #dreamsmanifesting #fullmoninleo #superbloodwolfmoon #fullmoonsquareuranus #spiritualjourney

As ProxyPonder notes, the Super Wolf Blood Moon falls on the exact halfway point in President Trump’s term in office. He was also born on a blood moon evening – June 14th, 1946.

They also suggest the event could signify a catastrophic downfall of civilization as noted by Pastor Paul Begely says in his television show on VTN Network.

“In Joel chapter 2 verse 30 & 31 ‘I will show wonders in the heavens and on the earth, blood and fire and billows of smoke,’ he explained.

“‘The sun will be turned to darkness and the moon to blood before the coming of the great and dreadful day of the Lord.'”

They mention a recent trend of growing seismic activity and volcanic activity throughout the world as a possible connection in this way.

Other sources of folklore and ancient beliefs say that full moons and supermoons use the proximity of the moon’s location to Earth and cause more seismic events because of the gravitational pull. Furthermore, plenty has been written and talked about regarding humans getting a little crazy during a full moon.

Those are just some of the many beliefs, folklore, and superstitions surrounding the 2019 Super Wolf Blood Moon – so take that as you may.

Watch the KXAN news report on this upcoming Super Wolf Blood Moon below and tell us if you’ll be stepping outside to see it this Sunday!