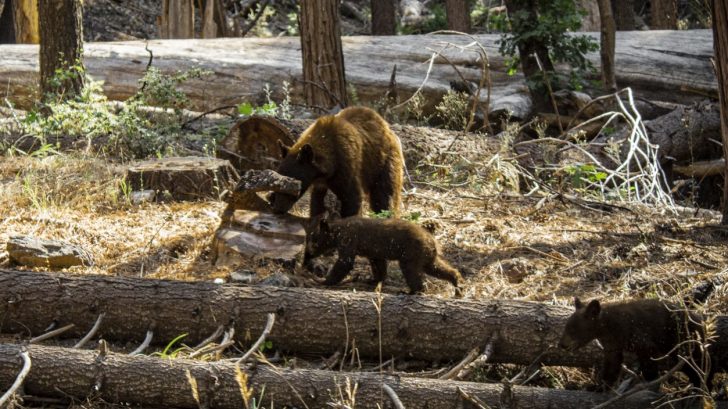 The BEAR League, a nonprofit organization whose mission is to help people live in harmony with bears, shared a post on social media of removing a mother bear and four of her cubs after they were found hibernating under a home.

The BEAR League said the incident took place in California.

The mother bear originally had three cubs last year and after they were about nine months old, she adopted an orphan cub that was around the same age as her own and was from the same area in the forest.

“Then she had four active, chubby little bears following her around. When it came time to go to sleep for the winter she found a house with an unsecured crawl space opening and ushered all the kids inside and told them to be quiet and go to sleep,” BEAR League wrote on Facebook.

The home had people living in it and said they heard some odd rumbling and snoring-like noises but just ignored them because it just simply didn’t make sense why they were hearing that.

“Today the bear family awoke and prepared to exit and the people in the house could no longer deny there was probably a bear under the house. So they called the BEAR League and we arrived immediately,” the organization said.

They said at first when they got there, they thought it was just one lone mother bear hibernating under the home.

However, they were in for quite the surprise after they spotted four yearling cubs emerge from the opening, following right behind the mother.

BEAR League’s Executive Director Ann Bryant told Huff Post that the process of getting the bears to vacate the area entailed “being territorial and scary, thereby making the bear believe it’s not going to be safe there anymore.”

Once the bears were gone, the home’s residents installed an electrical barrier in the crawl space to give the animals a small shock in case they tried to use the place to hibernate again.

Ann said that just in the Lake Tahoe area alone, there are 100-150 bears that attempt to hibernate under homes every winter and the organization is “kept very busy” removing several bears each day.

“People really need to make sure their crawl space openings are closed and secured before bears go inside… especially in the fall, when they are looking for hibernation dens,” she told HuffPost.

BEAR League’s Full Statement On The Removal Process Below