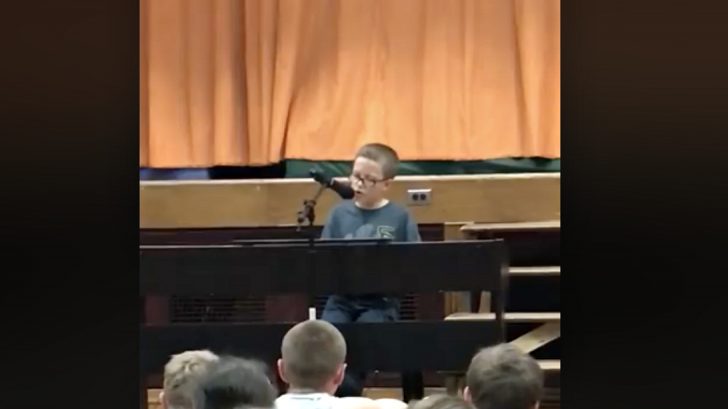 A 4th grader from Minnesota never anticipated that a performance at a school talent show would make him a star. Thanks to social media, 10-year old Adam Kornowski has found himself the center of attention for millions of people around the globe as his jaw-dropping performance of John Lennon’s “Imagine” takes the internet by storm.

Beforehand, Kornowski’s mom, Michelle, shared the video of her son playing the piano while singing “Imagine.”

She captioned the video saying, “There wasn’t a parent in the room with a dry eye by the end. He got a standing ovation and the applause lasted forever!!” The internet agreed that Adam has a special talent and proved it…the video of his performance has well over 13 million views!

Arguably one of the most recognized songs in history, “Imagine” was penned and recorded by John Lennon in 1971 and became his most successful solo single as it crossed genre lines and became an anthem of unity. Even country artists have covered the tune from the former Beatle. Dolly Parton included “Imagine” on her 2005 covers album “Those Were the Days,” and in 2015 music legend Willie Nelson performed the tune at NYC’s Theater at Madison Square Garden for Imagine: John Lennon 75th Birthday Concert.

While Adam Kornowski’s family is obviously aware that they have a prodigy on their hands, all of the attention caught them by surprise.

So Adam’s videos have blown up. I started out trying to thank everyone who shared it and respond to all the comments,…

Posted by Michelle Cavarnos Kornowski on Monday, May 28, 2018

We hope that this is just the beginning for Adam Kornowski and look forward to hearing more from this sweet grade schooler. Watch Adam sing “Imagine” in the video below. Then scroll down to hear Willie Nelson’s touching tribute performance.