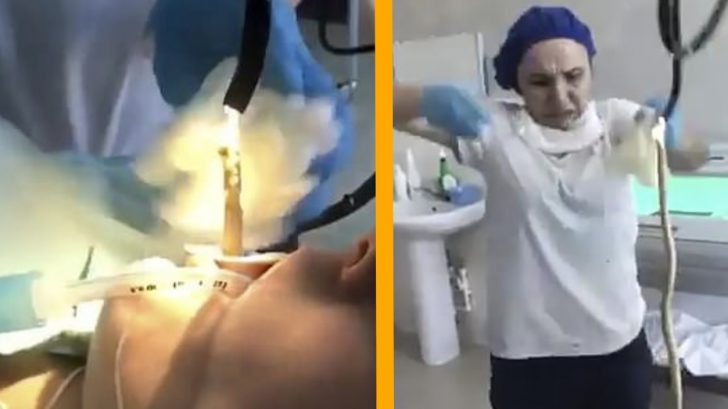 A young woman in Dagestan, Russia felt sick and went to the hospital to get a check-up.

After placing her under general anesthesia, the doctor was able to identify that something was stuck in her throat but he couldn’t tell exactly what it was.

While one of the medics was pulling the object out she said, “Let’s see what this is,” FR24News reported. She pulled the thing out of the patient’s mouth and was very surprised to find out it was a four-foot snake! Horrified by the discovery, the medic jumped back with a repulsive look on her face and quickly put the snake in a medical box.

No comment was made on if the snake was alive or not, but judging on the way the snakes head was curled up it may have possibly been. The snake species was not identified in the video and neither was the patient’s name, but we can guess that she was glad to have it removed.

How did this snake slip into the young woman’s throat? It happened when she fell asleep in her front yard and the snake slithered in while she was sleeping.

Watch Doctors Remove The Snake In The Video Below

WARNING: CONTENT MAY NOT BE SUITABLE FOR ALL VIEWERS