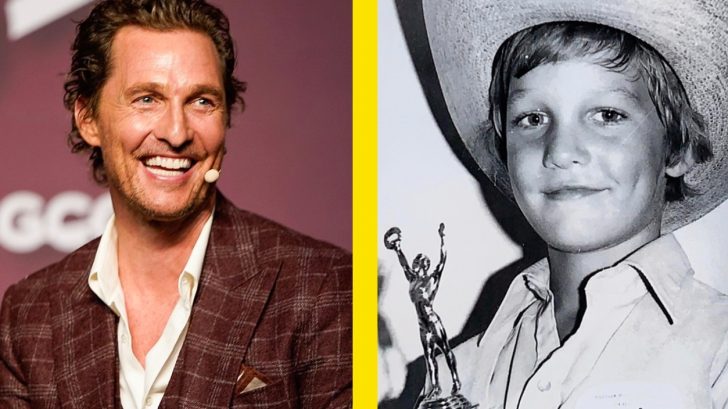 “For 43 years I was Little Mr. Texas…until I wasn’t,” he said in a statement shared to his social media accounts.

Matthew McConaughey is a Texas native who grew to prominence as one of the most-loved actors in Hollywood. As a kid growing up in Texas, he uniquely had the opportunity to compete for the title of “Little Mr. Texas” in 1977 – something his mom, Kay McConaughey, helped him with.

To go along with a story shared within his recently-released memoir, Greenlights, McConaughey shared a decades-old photo with his fans showing him holding up a trophy and dressed to the nines (Texas-style, of course).

He previously had explained the story on an episode of The Kelly Clarkson Show, sharing how he had claimed victory and the title of Little Mr. Texas for 43 years…until he realized he had been living a lie!

“The funny thing about the story is, I was 8 years old, go to Bandera, Texas, get up on the horse, answer a few questions about mama and stuff,” he said during an interview on The Kelly Clarkson Show. “And I won a trophy, that’s all I remember is that I won a trophy.”

So, that’s how he remembered this part of his childhood and he even had the photo to prove that he had won the contest. But, it all came crashing down in 2018 when McConaughey was looking through an assortment of old family photos. He spotted the picture of his “big win” and began to revel in the memories.

That’s when something caught his eye…

“And I was like, ‘Look at me, Little Mr. Texas,’ ” he told Clarkson. “And then something caught my eye. I looked on the nameplate that was engraved and I zoomed in on it and it said, runner-up. So I question, I go, ‘You know what… would I even be sitting here right now with the life I’ve had if I was raised thinking I was the runner-up?’ So what did that white lie from my mom do for me, ya know?”

“When she first told me I go, ‘But the other guy won,’ and she goes, ‘No, that family had a whole bunch of money. They were too rich, they were able to buy their kid a nice suit, we couldn’t afford to so they cheated.’ “

McConaughey’s story was entertaining enough, but with the added photo and detail, it makes it even more enjoyable.

Check out his full interview with Kelly Clarkson below.