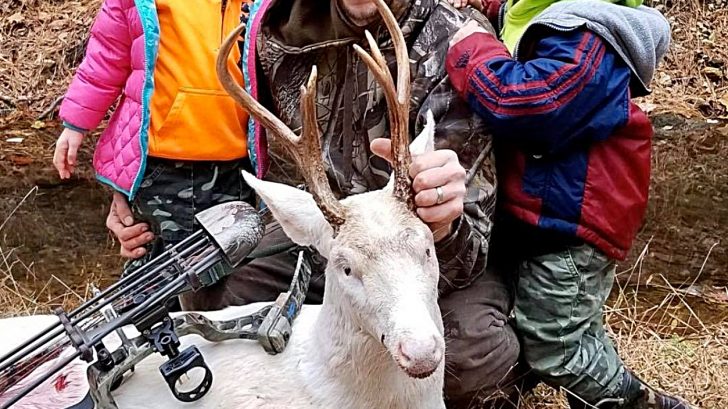 Christopher said he’d been hunting in the exact same spot for over seven years but has never seen the animal before. In fact, he says when he first spotted the buck he thought it was a random dog in the forest. That is until it started grunting and walking closer to him and he got a better look.

“The hunt itself was kind of a whim. I dropped my kids off at school at 9 o’clock, and I had to pick them up by noon. So I thought I’d go set up a blind and we’d go sit out in the afternoon. I walked by my tree stand and decided to sit for a couple of hours and see what happens,” Christopher said, according to Carolina Sportsman.

Around 11 o’clock Christopher was packing up and getting ready to leave to go pick up his kids and that’s when he saw it standing about 50 yards away. After realizing it was a deer and not a dog he got his bow ready.

The buck took its sweet time walking down a trail and made it about 25 yards closer. However, it was quartering towards him and standing at an angle where he couldn’t get a clean shot. Christopher was freaking out because he had to pick up his kids soon and was running out of time.

Shooting The White Buck & Sharing The Hunt With His Daughters

Finally, after walking about 55 yards off the deer turned into a quartering away position and gave Christopher the perfect moment to take a shot. He pulled back his arrow and let it fly. It hit the buck exactly where he aimed and the deer took off running into the forest a few yards then heard it crash.

Christopher noted where the deer’s location was and immediately left to go pick up his kids. He brought them back to show them his catch and because he’d trained his 4-year-old daughter on how to track deer she was excited to put her training into action.

He let her track the deer by herself she managed to follow the blood trail back to where it fell. She was about 70 yards ahead of Christopher when she threw her hands into the air screaming “I got him! I got him!” It was a beautiful moment that they wanted to hold onto forever so Christopher decided to get a full-body mount done on the deer and have it showcased in the 2020 Dixie Deer Classic.