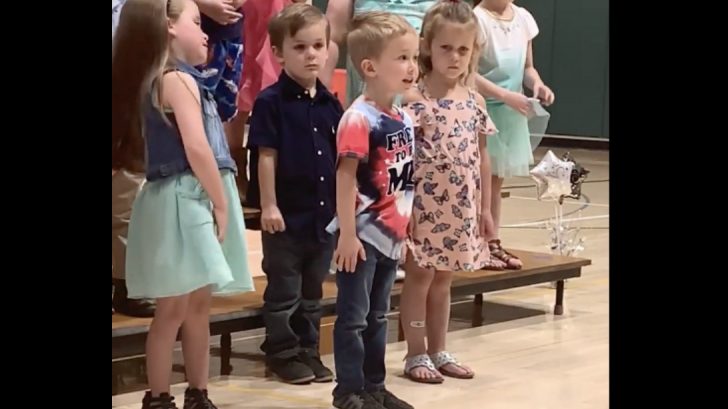 In what is perhaps the most adorable video we’ve seen in recent months, a talented 4-year-old stood before a crowd at his preschool graduation to sing “The Star-Spangled Banner.”

The cute and talented kiddo is Jake, son of Curt Schuman who shared the video to social media, saying, “Well PROUD DAD moment!!! I don’t usually get emotional about much, but Jake got me tonight. He was asked to sing the National Anthem at his preschool graduation tonight, and he nailed it!! So proud of this little fella and all the joy he brings to everybody around him!!”

The video shows Jake confidently standing before a crowd of his peers and their parents at Triton Central Elementary School in Fairland, Indiana, as he delivers a nearly pitch-perfect rendition of the national anthem.

Jake’s dad told local media that his son has been singing the national anthem for about a year, and is often heard belting out the patriotic tune before ball games. But, he had never performed the song in front of a crowd until his preschool graduation.

“He has always been a little patriot,” Schuman said of his son. “Whether saluting or holding his hand over his heart when he hears the anthem played, he stops and pays respect to our anthem.”

It is worth noting that Jake’s dad is a former United States Air Force airman and currently serves as a police officer for the Shelbyville Police Department. Thank you for your service, Mr. Schuman, and for raising little patriots like Jake.

Hear Jake’s impressive rendition of “The Star-Spangled Banner” in the video below.