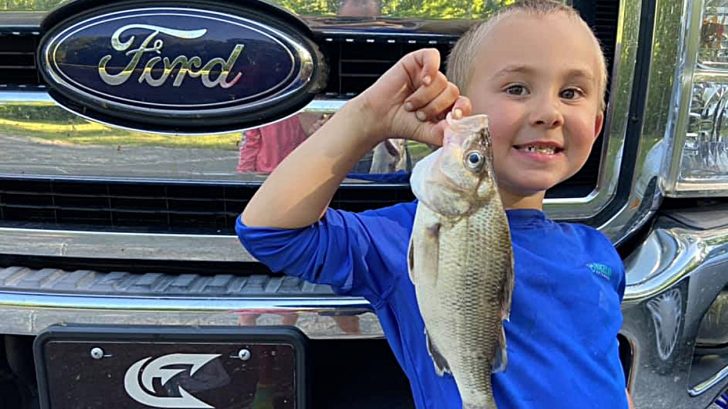 4-year-old Colt Huffman from Lake Wylie, South Carolina caught his first fish on his own in Lake Wateree and he almost broke the state record for catching the largest white perch.

So the reason I was look for a certified scale was because Colt caught a big perch today all by his self! He’s missed…

On April 21st, 2020, Colt was with his sister Allie and their dad Lee Huffman who runs a fishing guide service called Huffys Guide Service when he hooked the 1-pound, 14-ounce perch.

“It’s the first fish he’s truly caught all on his own. And he came a lot closer to a state record than I ever have,” Lee Huffman told Carolina Sportsman.

The current state record in South Carolina is 1-pound, 15-ounces. It was caught by Capt. Rodger Taylor in Lake Wylie and he tied with Frank Drose, Sr. who also caught the same size fish in Santee.

Colt used a Catch the Fever Striper Stealth rod that had a 15-pound test Slime Line monofilament, a No. 1 circle hook, and a 3/4-ounce weight. His dad put a cut of herring on the hook for bait and Colt tossed it into the lake.

The bait sank to the bottom and within a few seconds, Colt felt a bite. He yelled to his father, “I got a fish dad!” Lee said he and Allie didn’t really believe him so they didn’t pay much attention to it. However, young Colt knew he had something and began reeling in the fish.

Lee was amazed that his son reeled it in all on his own but was even more impressed at how big the white perch was. As quickly as possible, Lee put the fish on some certified scales to weigh it and was astonished to find out it weighed only 1.25 ounces less than the state record.

“He literally lowered the rod down to the bottom, set the hook, and reeled it in all on his own. It was his true ‘first fish’ where he did 100% of it all. It was so cool,” said Lee Huffman.

Watch A Short Video Below Of Colt Fishing That Day