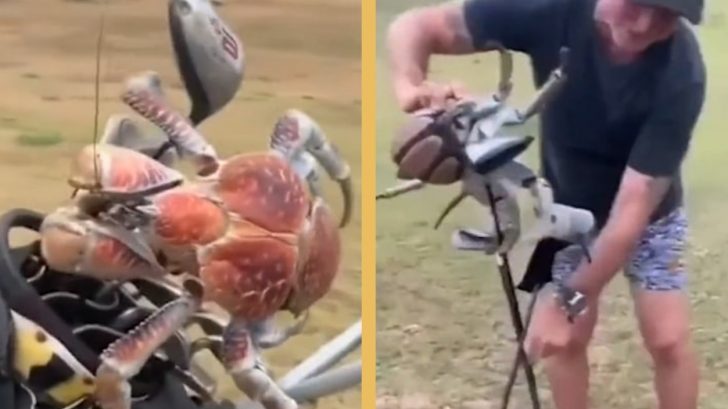 Advertisement
Advertisement
A group of golfers were somewhere in Australia when they filmed the bizarre event of a massive 3ft crab stealing one of the athlete’s golf clubs and then breaking it during a match.

According to the gentlemen in the video, the golfer stepped away from his bag of golf clubs for just a few moments to swing at a ball when he returned to find the crab clinched to one of his clubs.

The video showed the robber crab tightly holding onto the man’s TaylorMades as he tried to push his caddy kart around to entice the crab to let go of his clubs. However, it didn’t work. Not at all.

The golfer got tired of waiting for the crab to let go so he removed the crab from the bag and as he picked it up, the crab held onto three golf clubs and took them with it.

The golfer was able to get two of his clubs out of the crab’s pincers, however, it ended up stealing one of the club’s headcovers in the process and it also wasn’t letting go of the last club.

“Just let him have it, mate,” one of the golfer’s watching the battle go down said. “He’s beaten us.”

As the man tried to continue prying the club from its powerful pincers, the crab’s grip became so strong that it pinched the man’s golf club in half.

Nobody wanted to lose a finger so they ultimately just let the crab have the golf club headcover and finished their game without it. It’s not clear if the loss of the club actually affected the golfer’s game but we’re sure he was glad to finish with all of his fingers safely intact.