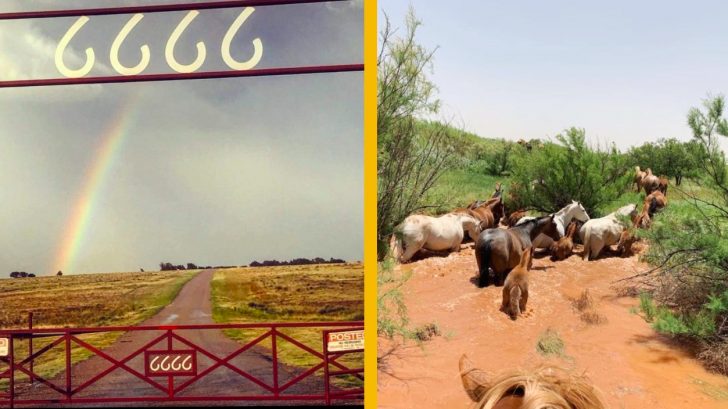 If you are interested in ranch life and have $341 million burning a hole in your pocket, this Texas listing might be your dream come true!

The North Texas Four Sixes Ranch is approximately 266,255 acres, making it one of the state’s largest ranches. The ranch is made of three separate properties, all of which must be purchased as one entity. Altogether, the ranch size translates to roughly 416 square miles, which is almost the size of San Antonio! Based on the 2010 census, San Antonio is approximately 461 square miles.

“Having been established 150 years ago, an opportunity to purchase ranches of this scale and significance only come on the market once in a lifetime,” listing agent Sam Middleton told KSAT 12 News.

Samuel Burk Burnett started the ranch about 1900. Burnett was one of the most successful cattlemen in Texas history. While legend claims Burnett’s ranch name got its name from a winning poker hand of four sixes, the legendary rancher actually bought 100 cattle with an existing 6666 brand at age 19.

According to the listing agent, Burnett decided to construct “the finest ranch house in West Texas” around 1917. In his statement, Middleton shared an impressive list of visitors to the estate.

“This stately home still stands as the main house at the 6666 Ranch. Early day visitors to the home included President Roosevelt, Will Rogers and the Indian Chief Quanah Parker,” Middleton explained.

After Burnett died in 1922, his daughter, Anne Valliant Burnett, inherited the ranch. When Burnett’s daughter passed, the property went to Anne Burnett Marion, who recently died on Feb. 11, 2020. The terms of Marion’s will instructed for the entire ranch to be sold. Now, the massive estate is on the market for the first time in the ranch’s history.

Do you wish that you could purchase Four Sixes Ranch? You can learn more about the ranch in the video below.