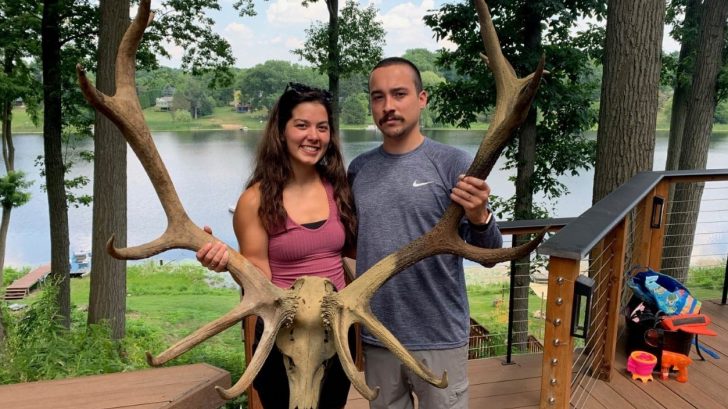 In Fenton, Michigan, Michael Bleau and his family were moving a swim platform on Lake Sullivan when something snagged on the anchor line. It was about 40-50 feet of water, Michael reported to MLIVE.

A sneak peek! Recently, an elk skull was discovered in a lake in Fenton, Mich, and on July 10 we picked up the skull and…

Posted by Cranbrook Institute of Science on Thursday, July 23, 2020

As they pulled the anchor, they were surprised to find a full elk skull with large antlers. Elk have been extinct since around 1875 in Fenton-area.

“We’re all kind of shocked,” Michael Bleau said to MLIVE. “It’s amazing that this thing survived that long down at the bottom of the lake and that we snagged it with an anchor line – just some random happenstance – and dragged it out.”

The family loaded the elk skull in their boat and took it back to shore for more examination. Michael reached out to archeologists and spoke to several universities to narrow down the elk skull’s age and identify the species.

As reported by DeerAndDeerHunting, scientists were able to determine the elk skull’s age. Radiocarbon dating methodology indicates the elk died almost 300 years ago. This discovery brings more information on the elk. It is nearly certain that the elk specimen is an Eastern elk. Also, the research indicates that this elk was most likely among the last of the state’s native population.

Michael says he doesn’t have enough space to keep the giant-size skull in his house. He is open to handing it over to a collector or to someone who can make good use of it.

“We’ve had a ton of people coming over just to see it,” Bleau said. “It’s just a really odd experience.”