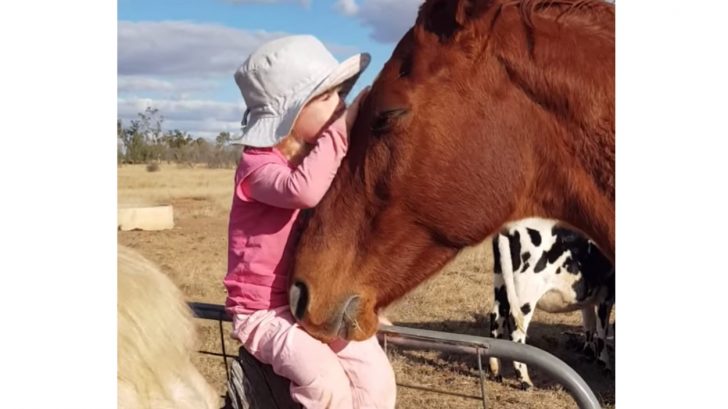 On Saturday, June 20th, 2020, Only In Australia shared an enchanting video on Facebook showing the magical moment between a little farm girl and her serenaded pets.

On a farm in Australia, Kelli Thomas, a country girl, and mother to a sweet little 3-year-old named Myf said she was outside taking care of the animals with her daughter was tagging along.

They had just got done feeding the cattle that afternoon and Myf had been singing the whole time. As they entered into the horse pin, Myf with her cheering attitude, decided to climb up on an old strainer post to get herself at a better height advantage with the horses.

She sings the entire time as she climbs up and the horses in the distance hear her. They wander on over to investigate what’s she’s doing and before you know it, they’re all serenaded, caught in a sleepy, daydreamy state.

Kelli Thomas told Only In Australia, “This is 3-year-old Myf singing to her horses, Chester and Teddy. She climbed up on an old strainer post while singing. The horses wandered up to investigate and ended up being serenaded to sleep. Just a quiet winter afternoon after feeding the cattle. She’s an Aussie country girl who enjoys having her animals around her.”

Watch 3-Year-Old Sing To Horses In Video Below