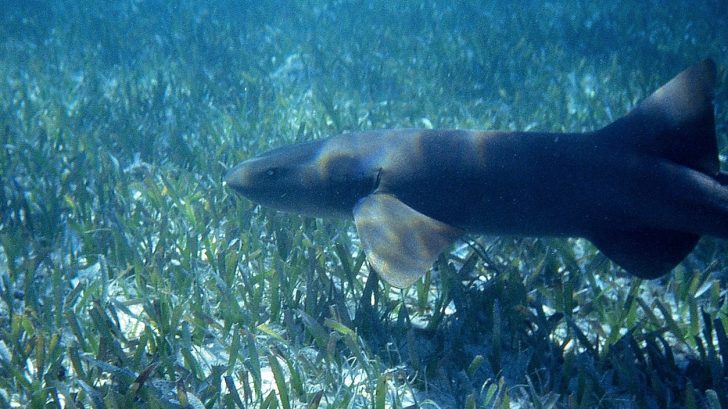 44-year-old sales director Michael Downer flew down to the Caribbean for the holidays with his family when his 8-year-old son was attacked by three sharks and had chunks of flesh hanging off both legs.

The British man said that he brought his three children, Finley Downer who was attacked by the sharks, and Finley’s two sisters, 9-year-old Lily and 12-year-old Emily, to The Bahamas on an excursion to the protected harbor Compass Cay when the incident took place.

The 8-year-old was said to have been standing on a dock that sinks down into the water when Michael heard a terrifying scream from Finley who was suddenly being bitten by a group of nurse sharks.

The terrified boy had three nurse sharks biting on both of his legs and his 12-year-old sister heroically dragged him out of the water away from the frenzy.

Michael told The Sun, “Suddenly, I heard a terrified scream and saw dozens circling Finley. There was so much blood. Bits of his leg were hanging off. My son could have been killed. It was like a scene out of Jaws.”

Michael further explained that when they first got there, they were told by their tour guide that the sharks on the tour didn’t bite and they spotted a group of them swimming nearby a lagoon next to a crowd of people on vacation.

The family went over there and got into the water with the sharks not aware that people had been throwing the sharks scraps of food.

The boy was lucky to be alive and quickly taken to the nearest hospital on a golf cart where Michael paid an additional £2,000 ($2424.76) to have him airlifted to take Finley to Nassau for a three-hour operation.

The father said he was furious because he said the tour guides told him the sharks were safe and his son ended up leaving the resort in a wheelchair to let his legs recover.

The operator of Exuma Escapes, which is a five-island excursion that also includes guided swimming with pigs and was part of the family’s trip, said the family went into the water to pet the sharks without a tour guide and into a lagoon that is not used on their tours.

15 Best Shark Attacks Ever Caught On Camera Below