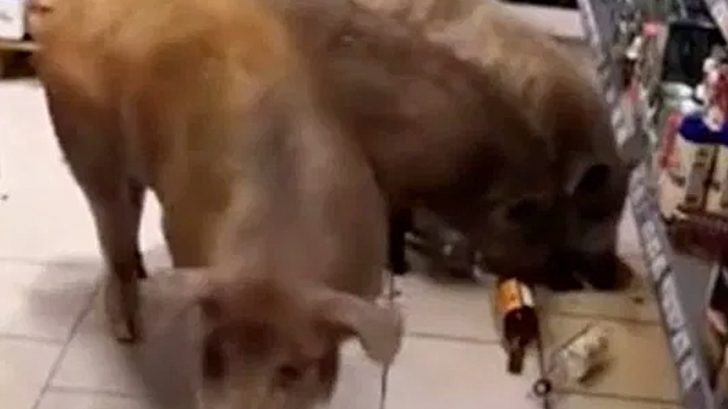 Three little pigs went to the supermarket and it wasn’t to go shopping for groceries. These three went directly to the alcohol section of the store and got a little tipsy. Yup, that’s right. Three pigs were reported to have walked into a market in Russia, smashed open a few bottles of alcohol and then started drinking them off of the floor.

According to a report put out by Metro.co.uk, it was a mother pig and her two piglets that escaped from a nearby farm in Tyumen, Russia one night and made their way to the market. A video was taken of the pigs by the locals and was later posted on VK.com which is a predominantly Russian-speaking social media platform.

The pigs allegedly entered the store to escape the freezing cold temperatures outside and once they got inside all the shoppers did about it was complain and laugh at them. Once the pigs knocked over a few bottles and alcohol started spilling everywhere, they licked up the spillage and got a buzz before the staff eventually kicked them out.

One of the shoppers started to complain in the Russian language saying, “Is this a pigsty or a store, people?” While another person jokingly spoke up and said, “We all like a drink at this time of year.”

Watch The Video Below Of The Pigs In The Market