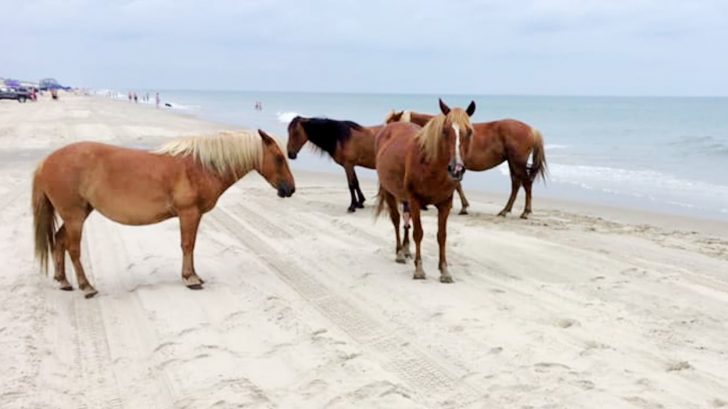 Hurricane Dorian may be long gone by now, but the devastation and heartache it caused is still being felt. An extra dose of heartbreak arrived when it was revealed that 28 wild horses were killed by a storm surge caused by the hurricane.

The Outer Banks is a group of islands in North Carolina where wild horses roam free. When Hurricane Dorian began moving toward the state, folks worried about the majestic creatures who have achieved worldwide fame.

Since the horses are wild, and often confrontational, they can not be easily corralled. So those who care for the horses could not control where they went or how they reacted during the hurricane.

But the horses of the Outer Banks have dealt with hurricanes for many years, so the people had faith they would weather this storm as well.

Unfortunately, that was not the case. While all horses in the two largest/most famous herds survived, 28 members of a smaller, third herd were lost in the storm.

The herd, which lives on Cedar Island between the Outer Banks and the mainland, contained 49 horses. There are now only 21 remaining members.

Woody Hancock owns and helps care for the horses, and spoke to McClatchy news group about the ones who drowned. The Charolette Observer quotes him:

“It was a mini tsunami. The horses normally see the water start to rise in a storm and migrate to higher ground, but they just didn’t have time. The shift in the wind happened too fast and they were taken off guard and washed off the island.” Hancock then went on to add, “They didn’t have a chance.”

The same terrifying wall of water that blasted Ocracoke Island during Hurricane Dorian on Sept. 6 is being blamed for washing 28 wild horses to their deaths in North Carolina’s Pamlico Sound. https://t.co/fzz8LW8Y9S

Hancock told the publication he believes there was an eight-foot surge of water in less than an hour, and the horses were not prepared. While most of the older animals managed to escape, most of the younger horses were swept up in the surge and drowned.

Officials told The Charolette Observer that some of the deceased horses have washed up at Cape Lookout National Seashore. The others remain missing, or are presumed to be lost out at sea.

“This has really affected everybody on the island,” Hancock said. “All the horses were named after local people on the island and so every family felt a connection to the herd.”

It’s heartbreaking to hear about the deaths of such beautiful creatures. Hurricane Dorian caused so much devastation, and our prayers go out to all who were affected by it.