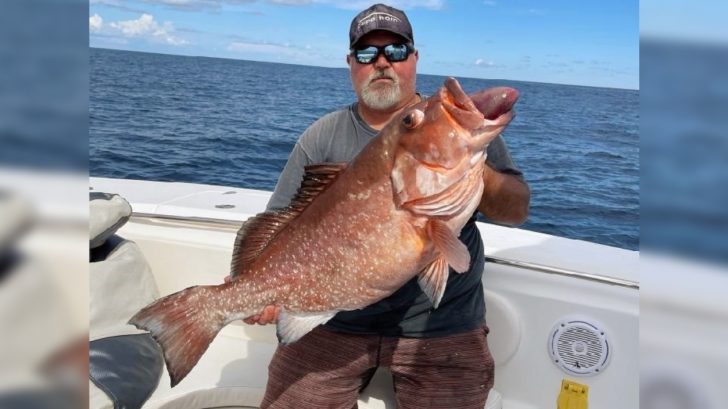 According to the Department of Natural Resources in Georgia, 49-year-old Bruce Bartlett Jr. from Kingsland, Georgia just shattered the state record after reeling in a massive 26-pound, 6.4-ounce red grouper measuring 34.5 inches long.

It completely crushed the previous Georgia state record of 19 pounds and 7 ounces that was set nine years ago by John Wren.

Bruce told officials that he caught the fish on Oct 4th off the coast east of Navy Tower R4 on his boat, the Fishslaya Deuce. He said he caught it in about 175 feet of water and it was a hard-fighting fish to catch.

After reeling the sea monster into his boat, it was taken back to M&A Seafood Market in Kingsland to be weighed.

They weighed the fish on a scale certified by the Georgia Department of Agriculture, and the weighing was witnessed by two people who signed the record application.

The application was then sent to the state’s Saltwater Gamefish Records Committee. After they reviewed the application and photos sent in to show the fish and all its measurements, they approved the record on Oct 15.

“This achievement recognizes not only the size of the catch, but Mr. Bartlett’s skill as an angler and the sportsmanship displayed in landing a record-setting gamefish,” the director of the Georgia DNR’s Coastal Resources Division, Doug Haymans said in a press release.

Bartlett said that he was using a live cigar minnow as bait on a 5-foot 8-inch Ugly Stik Tiger rod with Shimano Torium reel and 65-pound test Power Pro line.

In addition to that, he was also using a fish finder sinker slide with an 8-ounce bank sinker attached to a 100-pound barrel swivel. As well as a 60-pound fluorocarbon leader and 6/0 Eagle Claw circle hook.

Bruce Bartlett Jr. was extremely happy with his catch.