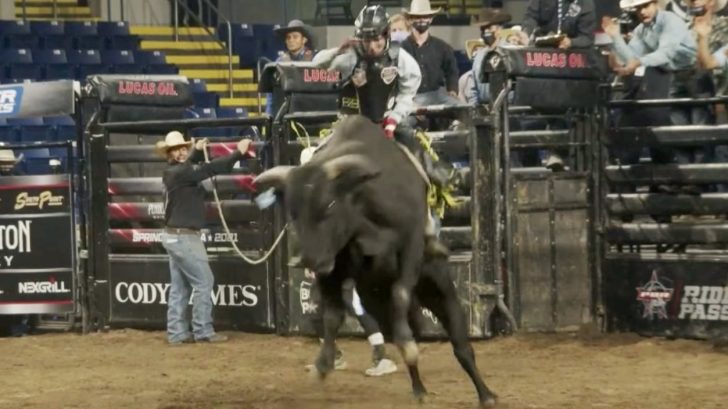 The PBR family is mourning the death of one of their own…Amadeu Campos Silva.

22-year-old Silva started his career in his home country of Brazil. PBR details his career and his eventual move to the U.S. as such:

“…he was a bull rider with a lot of promise, coming to the U.S. after competing in PBR Brazil in 2017 and 2018 to pursue his dream of a World Championship. In 2019, he was runner up at the Brazilian Finals and that year, made his U.S. debut on the Velocity Tour in Edinburg, Texas; 11 months later he made it to the premier series in Manchester, N.H. At the end of the 2020 season, one of Amadeu’s life dreams was accomplished: he rode in the PBR World Finals. This season, on the Velocity Tour, he was again angling to rise to the elite level.“

PBR described Silva as “a rising star” in the sport, and said he was “a cowboy with so much potential.”

But that potential unfortunately will never be realized.

As PBR details in a statement, Silva died on Sunday (August 29) following an accident at the Velocity Tour event in Fresno, California:

“Earlier today, young Brazilian bull rider Amadeu Campos Silva was involved in a terrible wreck at the Velocity Tour event in Fresno,” the statement read. “He was transported to  Community Regional Medical Center in Fresno, Calif., where he passed away.”

PBR CEO Sean Gleason shared a statement about Silva’s death on social media. “It is with extremely heavy hearts that we report that Amadeu Campos Silva passed away at Community Regional Medical Center in Fresno, Calif. where he had been transported following a severe accident during his bull ride at today’s PBR Velocity Tour event.”

Earlier today, young Brazilian bull rider Amadeu Campos Silva was involved in a terrible wreck at the Velocity Tour event in Fresno. He was transported to Community Regional Medical Center in Fresno, CA., where he passed away. Our heart breaks for Amadeu’s family and friends. pic.twitter.com/6CnjzcKE0U

Gleason and the PBR as a whole expressed their condolences to Silva’s family and friends.

“The entire PBR and western sports family extend our thoughts, prayers, and heartfelt condolences to Amadeu’s family and friends,” the PBR ended the statement on their website. “Please say a prayer tonight for them, and may Amadeu’s soul eternally rest in peace.”

Look below to watch a video of one of Silva’s final rides, which the PBR Velocity Tour Facebook page shared on August 14. You can tell how talented he was just by watching that one video.

We join the PBR family in praying for Silva’s loved ones during this difficult time.