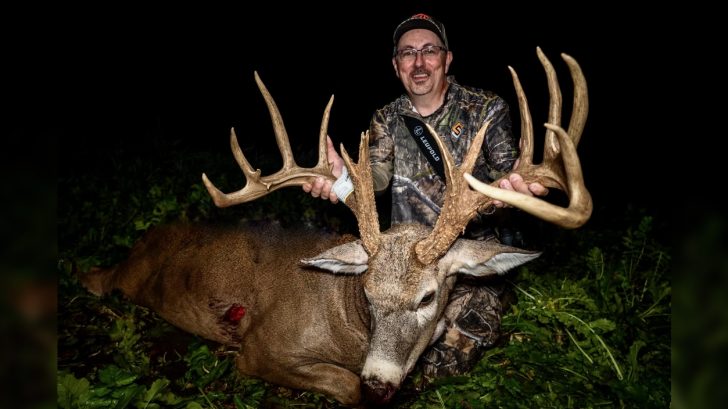 Lifetime bowhunter Mark Drury just downed a massive 216-inch buck that he’s been tracking for years and says it’s one of the biggest bucks he’s ever killed.

Mark explained that he first spotted the deer on a trail cam on his southern Iowa property back in the summer of 2018.

Mark told Outdoor Life, “He was 3.5 years old, and had it all —wide [rack], mass, the potential to be a really great buck. I thought this buck was going to be a giant.”

Mark said he got a few more photos of the buck during that summer but after the season was over, the buck disappeared for almost two years.

“I thought he may have got killed, shot, died from EHD, we never even found his sheds.”

During the summer of 2020 after Mark had placed some supplemental feeders out on his property, the big buck was spotted again by trail cams. However, he looked much larger than he did the last time Mark saw him.

“I only got one photo of him in 2020 and his velvet was starting to come off. Then that was it. No more photos through the winter even with supplemental feeding we were doing, no sheds from him, nothing,” Mark said.

The hunter explained that he was convinced that the deer had a fall range, a rut range, and maybe a winter range that he had snuck off to.

“A lot of summer bucks disappear in fall but show again in winter. But he never came back to our farm that year and I have no idea where he disappeared to,” he said.

When the summer of 2021 rolled around, Mark was back to putting supplemental feeders out, however, he had nearly forgotten about him.

“I wasn’t even focused on him, but much to my surprise and delight I got some post-velvet photos of him in September 2021, then even a daytime photo on a food plot where I’d taken another great buck,” Mark said. “On Sept. 30 he just disappeared again. I was convinced he left our farm again to go off for the rut or his autumn range.”

On Oct. 6, 2021, Mark’s deer cam captured more photos of the buck and the weather conditions were near perfect at the time, so he decided to go out the next night and try hunting him down.

“We decided to try hunting for him on Oct. 7, because a weather front came through that night, cleared off and a nice south wind made the spot ideal. And we knew he was still around, he’d not yet left the property.”

He and a cameraman went to the area where the buck was believed to be and climbed into an elevated deer stand and waited for it.

As they waited, the cameraman was the first to spot the buck and when Mark focused in on the deer with his binoculars, he knew it was the one.

“He was coming straight to us through the thick grass, looking like Moses parting the Red Sea ahead of him,” Mark explained.

The deer bent down to eat some grass and was standing broadside in the perfect position when Mark pulled back his arrow and loosed it. The arrow went flying across the field and hit the buck right on target.

The shot was perfect and hit the buck right behind the shoulder, completely passing through the deer. It took off running about 40 feet before it plopped over dead and Mark followed him in celebration.

You can watch the full video footage of the hunt and hear more of the backstory from Mark.