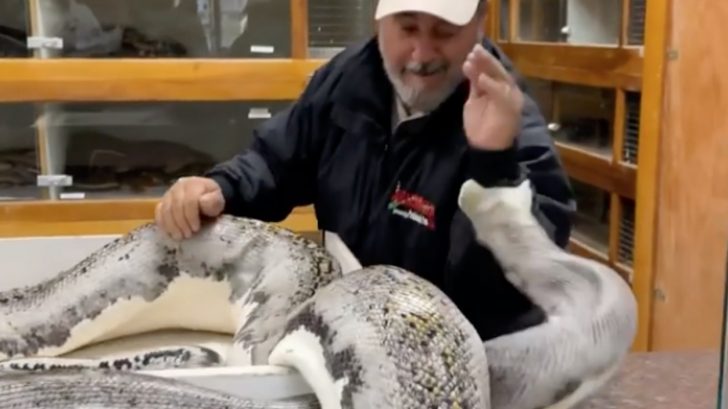 Founder of the Reptile Zoo in Fountain Valley, California, Jay Brewer shared a video of himself handling a 20-foot reticulated piebald python who had just laid eggs, and on camera, she bit him so hard on the arm it made him bleed.

He had opened a box that she was tightly resting in with her eggs and that quickly got her on the defensive. Her eyes were locked on the cameraman which gave Jay a chance to move her so that he could get to her eggs.

In two massive handfuls, he lifts a pile of eggs out of her box without her even noticing. The cameraman leans in to get a closer shot and that’s when “Grumpy Super Mom” struck him from a distance of six feet.

“I guarantee at some point she is gonna turn into super mom on me,” he tells the cameraman.

At this point, she was already agitated and turned her focus to Jay who was trying to get her out of her box and transported to another enclosure.

He was able to dodge her strikes a few times but after getting into the right position she was able to lunge for his arm and took a hard bite.

The seasoned reptile handler was wearing a jacket designed to take a snake bit but still…when she clamped her jaws down onto him, she pierced straight through the jacket.

The onlookers were shocked as they watched him get bitten. He finished carrying the reptile away from the box and to the new enclosure then took his jacket off to reveal that his arm had a row of bloody teeth marks.

Jay shared the video to his Instagram, noting that the snake has “never really liked me.” Even so, he also knows she was just defending her eggs and is “only one generation from a wild snake” which makes her “a little more crazy.”

Watch Him Get Bitten By Snake Below