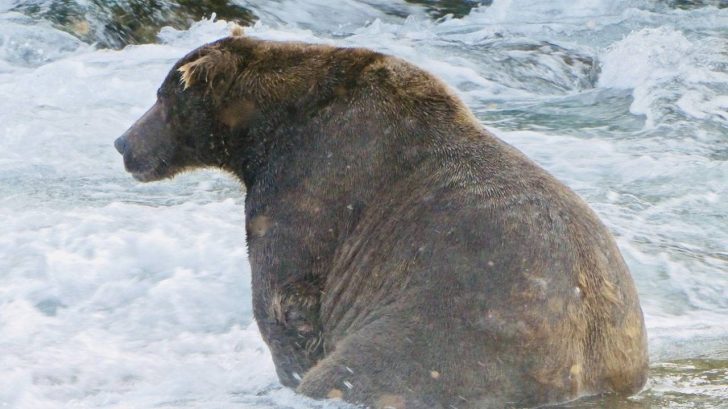 Every winter, bears around the world hibernate, spending months at a time tucked away asleep. To prepare for hibernation, these bears will eat more than usual during the fall to store up body fat to last them throughout the winter hibernation.

The Katamai National Park in Alaska decides to highlight the success brown bears – who reside in their park – have with preparing for hibernation. They call it “Fat Bear Week” where they have a daily competition between all their bears to find out which one the public thinks is the fattest, and most prepared for hibernation.

She is fat. She is fabulous. She is 435 Holly. And you voted her the 2019 Fat Bear Week Champion. All hail Holly whose healthy heft will help her hibernate until the spring. Long live the Queen of Corpulence!

While “Fat Bear Week” isn’t usually until October, there is one bear who has been getting a head start on the competition. He was actually eliminated in the semi-finals of last year’s “Fat Bear Week,” and that bear is known as 747.

According to a recent post from the National Park, 747 is pretty much ready to go for the winter even though he’s got two more months to prepare, saying he is “by far” the largest bear in the park!

“He’s big enough to dig a den, hibernate and not eat for another six months,” they wrote.

How big is a BIG bear? Bear 747 is by far the largest bear at the Brooks River. Right now he is fat enough to dig a…

The park also noted that he weighed 1400 pounds last winter before hibernation – and he still lost Fat Bear Week! We wonder how big he will get this year!

Explore.org shared a video of 747 attempting to climb up a hill out of the river to show folks just how large he has gotten.

“We’re not here to sway your #FatBearWeek vote, but consider the facts: it’s only August and 747’s rotund butt is already on the struggle bus,” the Twitter caption read.

We're not here to sway your #FatBearWeek vote, but consider the facts: it's only August and 747's rotund butt is already on the struggle bus. pic.twitter.com/TCBBEYGmAa