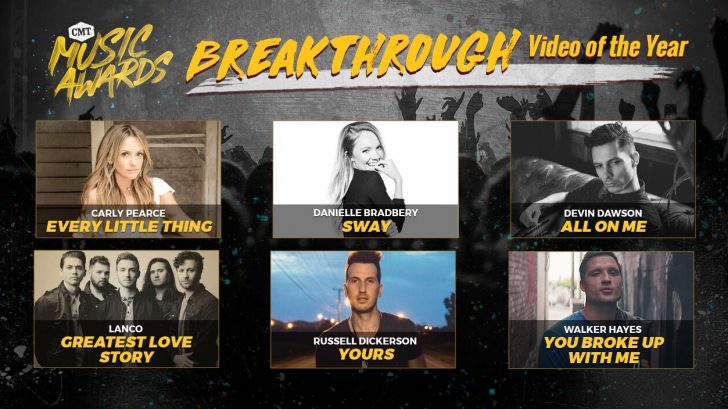 Just as the CMA Awards and ACM Awards have categories to honor new, upcoming artists, the CMT Music Awards set aside an award to honor fresh faces in country music, and the videos they create. This award is for Breakthrough Video of the Year, which is given to an artist who had a major breakthrough with a music video over the past year.

While the artists are typically “newcomers,” the videos nominated in the category aren’t always their first. Rather, they are videos that gained enough traction to help them “break through” and offer their career a boost.

Here are the nominees for the 2018 awards:

Devin Dawson: “All On Me”

Walker Hayes: “You Broke Up With Me”

At long last, the Breakthrough Video of the Year winner was revealed, and it was none other than “Every Little Thing” by Carly Pearce!

Directed by Patrick Tracy, Pearce’s video for “Every Little Thing” made its debut on CMT, GAC, and VEVO in March 2017.

The video was later posted to YouTube on July 20, 2017. Since then, it has accumulated well over 19 million views. Considering the fact that it was her debut music video, that’s quite impressive!

Congratulations to Pearce! You can watch her winning music video below.