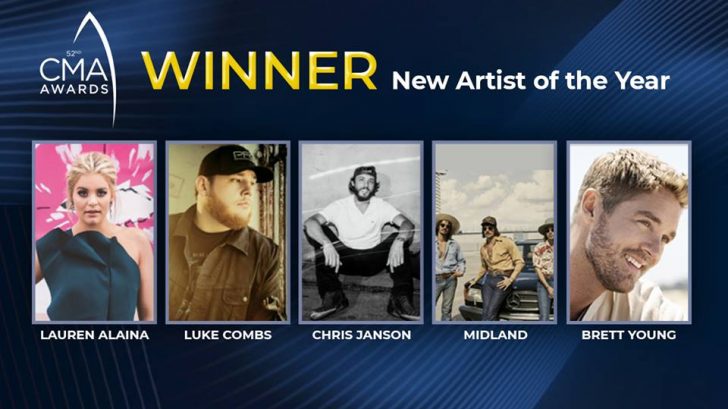 The Weight Of A New Artist Trophy

While all CMA Award wins are important, a win in the New Artist of the Year category can change the entire course of an artist’s career.

The official CMA rules describe the award, and who is eligible for it, as such:

“The Award is to the artist…who has for the first time demonstrated the most significant creative growth and development in overall chart or sales activity, live performance, professionalism and/or national media recognition related to the launch of their career. Any artist who has previously won a CMA Award (except Song of the Year, Musical Event of the Year and Music Video of the Year) or who has twice been a final nominee for the Horizon Award or New Artist of the Year Award is ineligible for nomination.”

So who was in the running for this year’s award? Here are the nominees:

This marks Alaina, Combs, and Young’s second time being nominated. So if one of them didn’t go home with the trophy, they can’t be nominated again next year.

Of course, they’ll still be eligible for the ceremony’s other awards!

"Genuine" & "superstar" don’t always go hand-in-hand, but that's not the case for #CMAawards New Artist nominee @LukeCombs. We sit down with this humble hero, his manager & more to see what keeps him so grounded. Stay tuned for the full Luke Combs story later next week!

One Of The Most Emotional Wins

In the past, the New Artist of the Year announcement has been one of the most emotional moments of the ceremony. Who can forget Maren Morris‘ passionate speech after winning the award in 2016?

That was just two short years ago, and y’all know how much her star power has grown since then.

So when it came time to hand out the trophy this year, who was the one that followed in Morris’ footsteps?

Well, it was none other than Luke Combs!

#CMAawards New Artist of the Year goes to… @lukecombs pic.twitter.com/sCIlM7fkkI

It’s no wonder why Combs won the New Artist of the Year Award. His career experienced immense growth over the past year.

Here is just a short list of what he accomplished since the 2017 CMA Awards:

As you can see, Combs is more than deserving of this win! Congratulations to him!