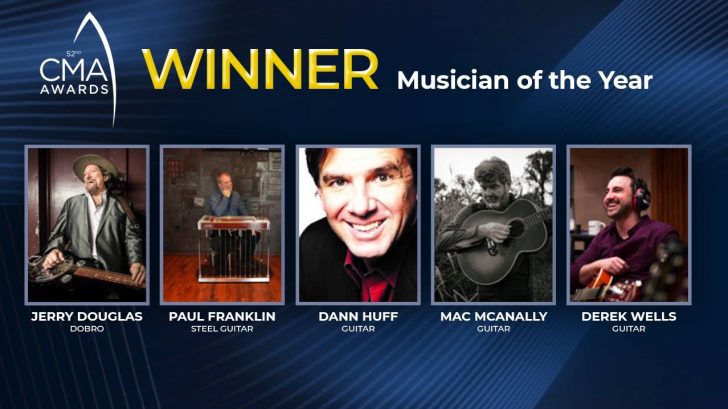 The talent at the CMA Awards goes far beyond just the singers. Although most artists can play their own instruments, credit must be due to the incredible musicians who play alongside them as well. This year’s nominees for Musician of the Year have all brought incredible success to the country music table. From working with Grammy-award winning artists to playing on record-setting albums, we congratulate these five nominees for all their hard work.

Background Of The Nominees

Douglas can play an array of different guitars including the steel guitar. Aside from Douglas’ solo recordings, he has played on more than 1,600 albums. Some of the artists he’s collaborated with are Garth Brooks, Ray Charles, and Dolly Parton. Douglas has won the CMA’s Musician of the Year award three times before, in 2002, 2005, and 2007.

Franklin is known as a multi-instrumentalist with a plentiful of steel guitar features. He started his career as a member of Barbara Mandrell’s road band. From there on, he toured with Vince Gill, Mel Tillis, and Jerry Reed. He’s been in quite a few collaborations with some of country’s biggest stars including Patty Loveless, Alan Jackson, and George Strait.

Huff pairs as a musician, songwriter, and record producer. He has conducted the Nashville Symphony, although he has been in both a Christian and hard rock band. Huff has played guitar on albums for Michael Jackson, Whitney Houston, and Kenny Rogers. He has won the CMA’s Musician of the Year award three times before, in 2001, 2004, 2016.

McAnally plays several instruments alongside being a singer-songwriter and record producer. He has recorded ten of his own albums as well as became a songwriter for Jimmy Buffett. He has worked with Kenny Chesney on several occasions, who has recorded his own written songs. In 2007, McAnally was inducted into Nashville’s Songwriters Hall of Fame. The following year, McAnally was awarded Musician of the Year by the CMA.

Also known as Josh Turner’s right-hand man for five years, Wells is a Nashville-native guitarist. Since then, he has performed and recorded with several country artists including Dolly Parton, Lady Antebellum, and Randy Travis. Over 30 of the songs that he has played on have been #1 hits. Wells is currently focused on recording and doing shows with Sara Evans and other stars.

Congratulations to @MacMcAnally for winning #CMAawards Musician of the Year! ?? Find out the rest of the winners in less than 10 minutes on the CMA Awards on @ABCNetwork.

Congratulations to Mac McAnally for winning this year’s Musician of the Year award. His hard work and talent have paid off over the years and we’re excited to see what other amazing productions he puts on for years to come!