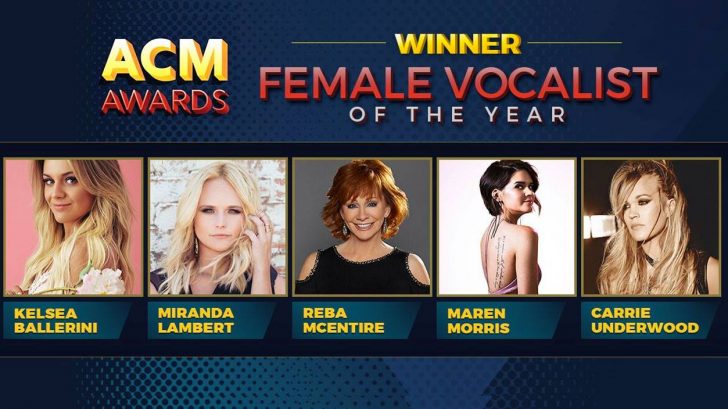 One of the most prestigious awards the ACM has to offer is the award for Female Vocalist of the Year. Every year, this award is issued to the female vocalist who the ACM views as an influential and successful figure in the country music industry over the course of the past year.

This year’s nominees for Female Vocalist of the Year varied from newer artists, to well-established superstars, to a country music legend. As you read the names of the nominees, you’ll understand why any one of them could take home the award:

Looking at that list, it’s easy to see why the Female Vocalist race seemed like anyone’s game this year. So you can bet that fans were quite excited to find out which one of these talented ladies would end up winning in the category.

At long last, the winner’s name was finally revealed to much fanfare during the ACM Awards‘ ceremony.

If you know anything about what Miranda Lambert has accomplished in the past year, it shouldn’t be surprising to you that she won this award. In addition to making waves and earning Grammy nominations for the material off of her album The Weight of These Wings, Lambert had one of the most extensive touring schedules of any female artist in country music in the past year.

Of course, Lambert is no stranger to winning this award, as this marks her ninth consecutive win. Prior to her win last year, she was tied with Reba McEntire as the record holder for the most wins in the category.

She became the sole record holder by earning her eighth award in 2017, and her 2018 win has only helped her secure that record further. Congratulations to her!