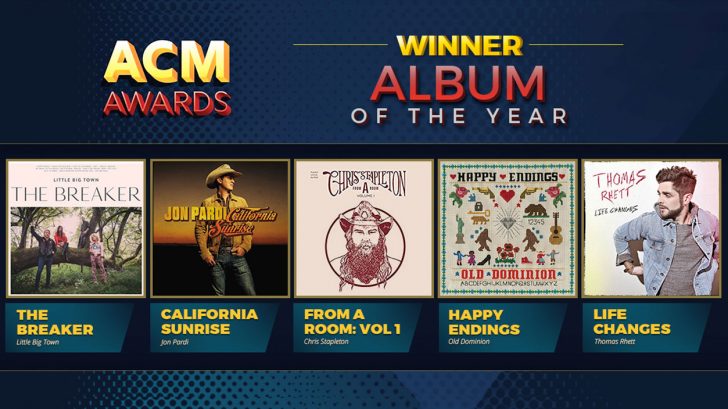 One of the toughest categories of the night, Album of the Year is also one of the most anticipated. Because it is not based on just one song, but the work of art as a whole, it’s really special when an artist takes this award home.

The ACM Awards have been such an exciting night, and as the show hands out its final awards, we just can’t imagine what they will have in store for us next year. Country duo Sugarland walked out to wild cheers to present the ACM Award for Album of the Year.

They read the nominees, which are as follows:

From A Room: Volume 1 – Chris Stapleton

Sugarland opened the envelope, and read off Chris Stapleton’s name!

From A Room: Volume 1 is Stapleton’s second studio album, which reached the top of Billboard‘s Top Country Albums chart and peaked at number two on the all-genre Billboard 200 chart. The album has already won a CMA Award for Album of the Year and Best Country Album at the Grammy Awards earlier this year. Stapleton also won a Grammy each for two of the singles the album produced, “Either Way” and “Broken Halos.”

Unfortunately, Stapleton wasn’t present to accept his award, so the show’s host, McEntire, came out to accept on his behalf and announce that he and his wife Morgane had just welcomed their twins! It is also his birthday. What a day!

Congratulations on this well-deserved award, and the birth of your twins, Chris!

Hot off the presses! Congratulations on your win and your newborn twins, @ChrisStapleton ! #ACMawards pic.twitter.com/4e9qhxMN69