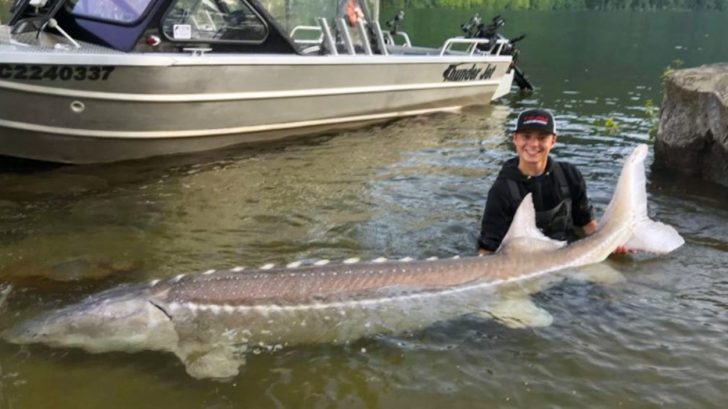 Jacob was fishing with his friends when he hooked onto the 20-foot white sturgeon. He said that the fish has been in existence since the Early Cretaceous period which was over 100 million years ago and not much has changed with them physically.

“Unlike most fish, sturgeons have no bones,” Jacob told Newsweek. “Their strong, unique shape is made up of cartilage and tough meat, on top of that is a thick skin which is hard to penetrate.”

He says that their super thick skin and boney plates on their body provide an organic armor for the fish. He adds that the reason he knows so much about the fish is that he’s been active in the sport for most of his life.

“I was introduced to fishing at a very young age by my dad. I grew up fishing, and then turned my hobby into a lifestyle. My favorite place to fish is on the Fraser River, it’s my home,” Jacob said.

He said on the day that he caught the fish that he actually caught two of them. He kissed both of them on the head before releasing them back into the water to live another day.

“We don’t raise the fish; we catch, tag (collect data) and release them,” he said. “There is a group of people who collect data to watch the white sturgeon population grow. They learn more about the fish, what areas they are in certain times of the year, how much they grow a year, and if they are healthy or injured.”

See More Footage Of The Sturgeon Fish Below