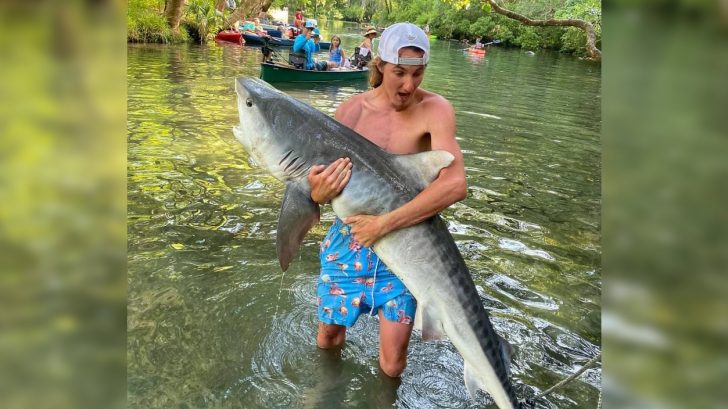 Florida Fish and Wildlife Conservation Commission issued a notice to appear in court to two men after photos of them surfaced handling a tiger shark in Florida’s Chassahowitzka River.

The shark was apparently caught by an older man who dragged the animal six miles up the river to a lagoon where all the people were swimming. Witnesses said they were in shock when they saw the man drive up with the shark.

A young man excited by what he saw asked the older man if he could pick it up to take a picture with it. Check out a photo below that was taken during that time. The photo was spread across the Internet and finally ended up in front of the police.

“FWC law enforcement officers have investigated this incident and have issued a Notice to Appear to two individuals for taking a prohibited species of shark,” a spokesperson for the FWC said, according to WFLA. “The two subjects currently have a Citrus County court date.”

Witnesses said that the shark was treated very cruelly and that the older man ended up killing the animal and gutting it in the river close to where all the people were swimming. Officials said the blood could have easily attracted alligators and put the swimmers in danger.

“I called FWC myself. I was scared to death. I’m not a troublemaker. I love marine wildlife,” the young man said.

The FWC also said there were more than two people involved in the incident but they have not all been identified yet. Authorities are also asking if anyone has any additional information about the incident to contact the FWC’s Wildlife Alert Hotline at 888-404-3922 or [email protected]