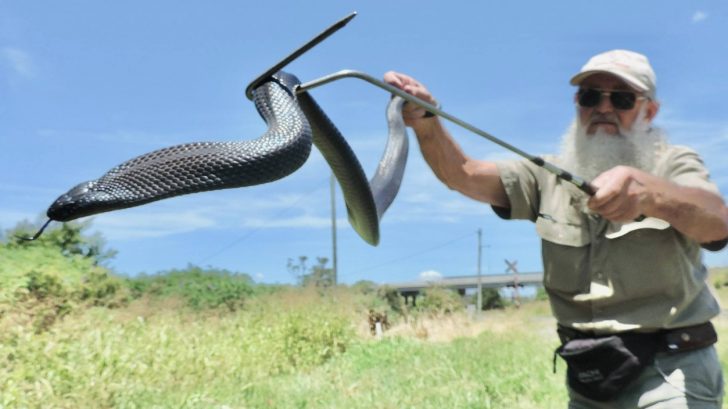 Grunter, a professional snake handler for Darling Downs Snake Catchers 24/7 was called to Oakey, Australia two days in a row to capture one of the deadliest snakes in the world – a blue bellied black snake.

Snake Catchers shared pictures and a video of the snakes on their Facebook page showing off their beauty and explaining some background information about them. Each snake was found in a different location and was captured, removed, and transported to a safer area to be released back into the wild.

The first snake was found in a family’s house on the lower floor of a two-story home. Grunter captured the blue bellied black snake, posed for a picture with it, and then explained that the blue bellies are usually found in drier areas, compared to the red belly black snake, which prefers wetter areas.

Snake Catchers added that, “They will grow to 1.5m, Dangerously Venomous. Venom causes cell damage, destroys red blood cells and breaks down muscle tissue. The damaged cells go to the kidneys. This can result in kidney failure.”

The very next day Grunter got a call about another blue belly and drove out to that location. When he arrived, the lady said it was in the yard and as they stood there and talked about the snake, it came slithering towards them about three feet away.

“It was an easy catch. There must have been a reason for it to want to come back so soon. Usually, they just tick off when they know they’ve been seen. It’s biting my boot and didn’t want to let go.”