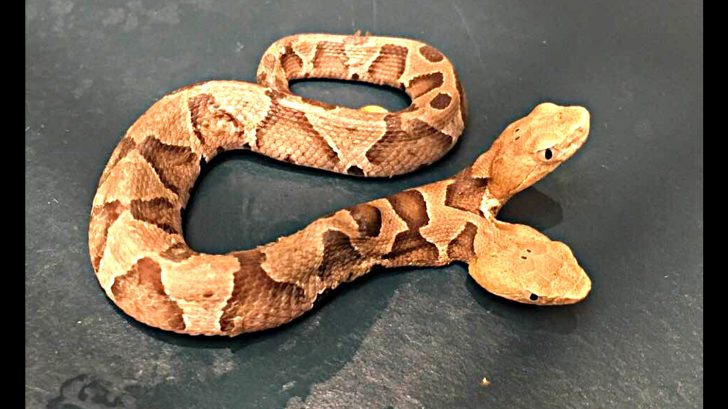 One of the rarest examples of a two-headed animal in recent years, this fully-functioning copperhead snake was discovered in a Virginia resident’s flowerbed…just slithering along on its merry way.

This Woodbridge, Virginia woman spotted the snake in early August and now it has been taken in by the Wildlife Center of Virginia to ensure it’s cared for properly. Scientists at the WCV examined the snake and took radiographs of it to learn more about the snake’s development and functions.

Apparently, the right head is one better suited to eat but with the left’s dominance it may end up being problematic for the snake.

Local fish and wildlife expert JD Kleopfer who works with the Virginia Dept of Game and Inland Fisheries posted about the snake on Facebook – saying that two-headed snakes rarely survive long because of how the heads develop differently. This can make it hard for the snake to eat.

“Thanks to the Wildlife Center of Virginia we were able to determine that the left head has the dominant esophagus and the right head has the more developed throat for eating. With a little luck and care, we hope to eventually donate it to a zoological facility for exhibit,” Kleopfer wrote. “It’s currently being cared for by a private reptile keeper with lots of experience in breeding and rearing vipers.”

The WCV explains that even though the snake may have problems taking in food because of its two esophagi, it is twice as venomous due to the fully formed heads.

“Two heads are better than one, but are two heads more venomous than one? In this rare case, it appears the answer is yes,” the center wrote.

Two heads are better than one, but are two heads more venomous than one? In this rare case, it appears the answer is yes: https://t.co/OPLYgzkzXE pic.twitter.com/5okH7l9HfI