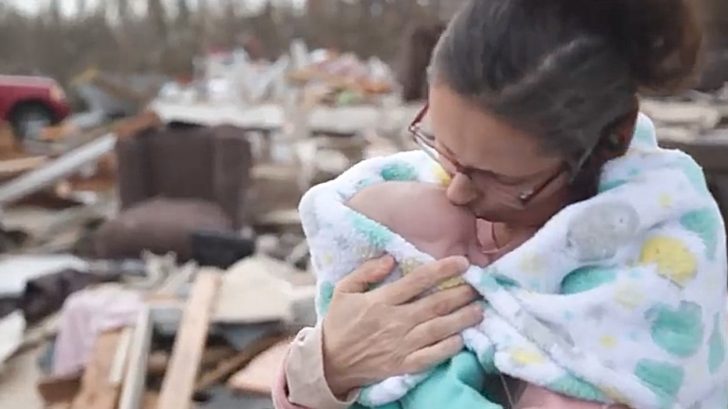 Clara Lutz’s says she was looking after her two infant grandchildren over the weekend when the Kentucky tornado hit their home and carried the infants off into the air.

Clara was watching 15-month-old Kaden and 3-month-old Dallas as she normally does on the weekends to give their parents a break from parenting.

She got the alerts early in the morning that the tornado was heading their way and quickly got up to bring the babies to the bathtub to try and keep them safe.

Clara explained that she place them in the tub with just a blanket, a pillow, and a Bible moments before the tornado completely ripped the home from its foundation.

“I felt the rumbling, I felt the shanking of the house. Next thing I knew, the tub had lifted and it was out of my hands,” Clara said in an emotional statement to 14 News. “I couldn’t hold on. I just – oh my God.”

As the tub flew into the sky with her grandbabies, the water tank in the bathroom hit her in the back of her head temporarily stunning her for a moment.

After the tornado passed through and the wind calmed down, she got to her feet and began frantically looking for the bathtub and her babies.

She said she couldn’t find them anywhere and feared they were potentially gone for good, but she kept searching for them in the rain anyway.

“I was looking everywhere to see where the tub may be. I had no clue at all where these babies was. All I could say was ‘Lord, please bring my babies back to me safely. Please, I beg thee,’” she told the station.

Rescuers arrived on the scene and began helping the local residents and one of them walked up to her and said they found the bathtub laying upside down on the ground with both Kaden and Dallas underneath it.

“I got in the sheriff’s car down at the end of my driveway, and it wasn’t long after that that they opened up the door and brought me Kaden, my 15-month-old. And they brought me my three-month-old, baby Dallas. They brought him to me. He had a goose egg on the back of his head, we didn’t know what was wrong,” Clara said.

At this point, they quickly took Dallas to the hospital where they found out that he suffered some internal bleeding in the brain but fortunately, it had stopped before they even got to the Vanderbilt Hospital in Nashville.

Hear Her Emotional Interview Below