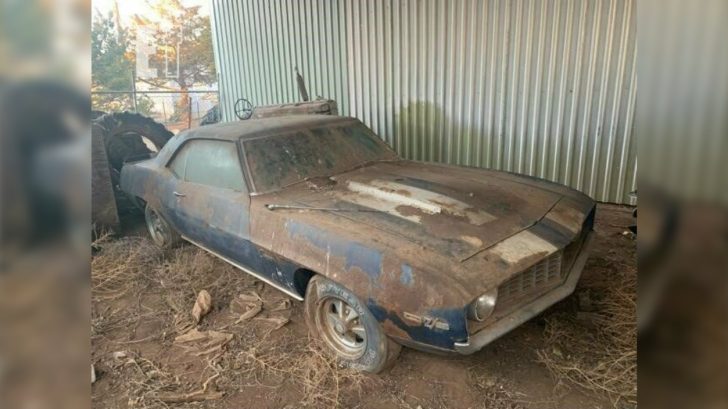 A man located west of Houston, Texas was cleaning out an old barn on a piece of property he owns when he found a 1969 Chevrolet Camaro hiding behind some things.

“This seems to be a very original, very complete 1969 Camaro,” the owner of the car wrote on Ebay.

The tags on the license plate said 1972 so it’s possible this hidden gem could have easily been sitting there for nearly 50 years. According to the description of the car, it comes with the original 307ci V8 engine and 3-speed manual transmission still intact.

The Camaro still has the glass and trim all intact and there were factory hubcaps still in the backseat, along with a new leather kit still in the box for the seats that were found in the trunk. Even though it had been sitting there for so long, the owner said the floors were still solid throughout the entire car.

The only downsides were the car had some surface rust patches all over it, however, the paint code on the body tag matched the original color and interior and can easily be restored. There was also a big dent in the roof, but that looks like it can easily be popped back out too.

He says it’s being sold with Bill of Sale only, and not the title. For those interested in all the specs, you can visit the eBay page it’s currently going for $30,000 or the highest bidder. For more on the 1969 Camaro, check out the video below.