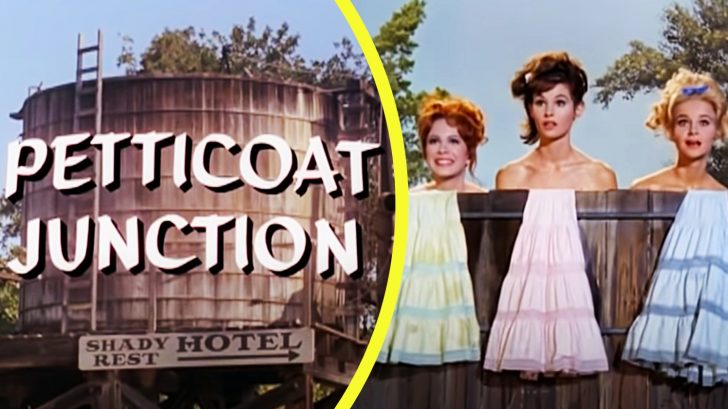 Staged in the fictional town of Hooterville, the popular 1960s-era sitcom Petticoat Junction was based around a local lodging establishment, called the Shady Rest Hotel and the widowed woman who runs it – Kate.

Pat Woodell, Bea Benaderet, Linda Kaye and Sharon Tate in a publicity photo for "Petticoat Junction" in 1963. Tate was originally cast in the role of 'Billie Jo' but her manager convinced her to walk away from the show. ? pic.twitter.com/z5ziNb7HEz

The show revolves around Kate and her three daughters Billie Jo, Betty Jo, and Bobbie Jo, along with her uncle Joe, all of whom seem to find themselves in the middle of some predicament or minor crisis. Especially Uncle Joe – who is apparently filled to the brim with various schemes to get rich.

With all these wild scenarios and funny twists, you’d think that someone with a wild imagination must have been behind this crazy story about a hotel situated alongside a water stop on the railroad. Well, that couldn’t be further from the truth!

As it turns out, the Shady Rest Hotel and the antics befalling the characters on Petticoat Junction were all based on a real hotel – and its wide cast of character-like guests. This hotel was called the Burris Hotel in Eldon, Missouri.

49 years ago today, the final episode of Petticoat Junction aired on CBS pic.twitter.com/CfCg3E4tF4

The Burris Hotel was known to be a “hustling, bustling” hotspot, as described by Peggy Smith Hake at the Miller County Museum. The writer of Petticoat Junction, Paul Henning, drew inspiration for the series after hearing of the tales from the Burris Hotel from his mother-in-law, whose parents were the innkeepers.

As one of nine children who grew up at the Burris Hotel, Henning’s mother-in-law, Alice Burris, had many memories and tales of wild visitors and strangers who would come through town. It was from these stories she told that Henning was able to build an entire television series.

For seven years, Petticoat Junction entertained and delighted folks all across America with its hysterical antics and wild stories – which were all based on real people!

Listen to the show’s creator, Paul Henning, discuss how the show was created below.