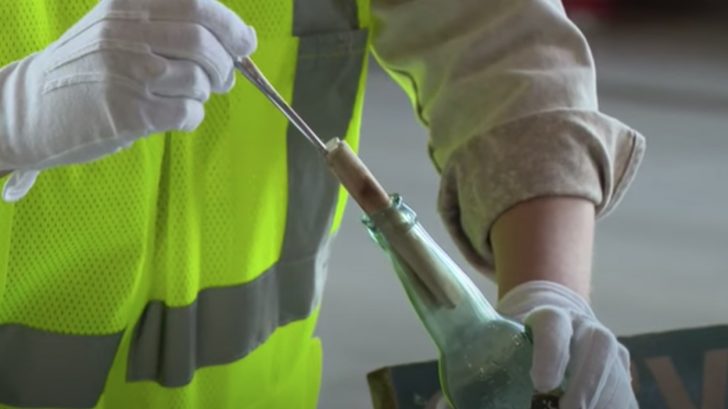 Crew workers Lukas Nielsen and Leo Kimble were working in Corktown’s Michigan Central Station when they found a note from 1913 hidden in a bottle.

The discovery happened in the main lobby of the station when the men were removing an unstable wall and found the bottle tucked in the wall near the ceiling. The bottle was a Stroth’s beer bottle dating back to 1913.

At that point, Lukas asked the crew to stop because he thought it may be important and wanted to examine it.

Lukas said he wasn’t sure if the paper inside was a real note or just someone’s sandwich wrapper they shoved in an old bottle when they were done with lunch. They carefully took the note out of the bottle and read it.

“Dan Hogan and Geo Smith stuck this [illegible] of Chicago,” the note read, according to Fox 2 Detroit.

The note was apparently placed there during construction before the station was open by Geo and Dan who, after doing some research, were plasterers based out of Chicago.

“Work began on Michigan Central Station in 1910 and it opened in December 1913, with the first train departing the day after Christmas. The depot would serve as a booming transportation hub for decades before train travel declined, eventually leading to the closure of MCS when the last train left on Jan. 5, 1988,” Fox 2 Detroit reported.

Footage Of The The Restoration Process Below