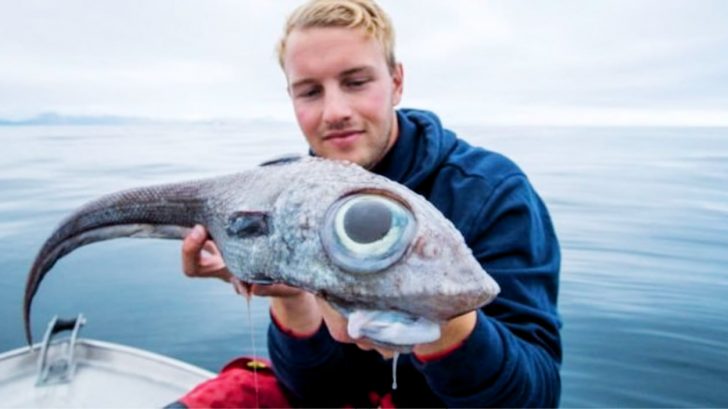 If you thought the two-headed fish from Lake Champlain was a bizarre sight to see, just wait until you set your eyes on the deep-sea creature that one fisherman brought to the surface.

19-year-old Oscar Lundahl serves as a fishing guide for Nordic Sea Angling. One day, he went out to sea near the island of Andoya in northern Norway in search of blue halibut, a rare type of fish.

But that day Lundahl mistakenly reeled in a fish that’s even rarer than the blue halibut he was searching for…a ratfish.

The fish commonly referred to as a ratfish carries the Latin name Chimaeras Monstrosa Linnaeus, which is derived from a mythical monster that was said to have the head of a lion and the tail of a dragon.

While the ratfish is not related to lions or dragons, it does share a close relation to sharks. In fact, they have also earned the nickname “ghost sharks.”

Humans hardly ever come in connect with ratfish because they live in deep water. Since they tend to stay away from the shallows, they are rarely caught.

But Lundahl managed to catch one, and he was shocked by the sight. He told The Sun that it took him 30 minutes to reel the fish up from a depth of 800 meters (nearly 2,625 feet). When he brought it to the surface, he had no idea what it was.

“It was pretty amazing,” he told the publication. “I have never seen anything like it before. It just looked weird, a bit dinosaur-like.”

While Lundahl couldn’t identify the fish, his colleague knew that it was a ratfish.

Lundahl took a few photos with his catch after he freed it from the line. Sadly, the ratfish did not handle the sudden change in pressure well, and it passed away.

But Lundahl said that the ratfish did not go to waste. He said he took it home and pan-fried filets of it in butter, saying it resembles the taste of cod, but “tastier.”

Have you ever seen a ratfish in person before? Whether you have or have not, we bet you’d still be fascinated by the video about them below.

You can also see more photos of Lundahl’s ratfish by clicking here.