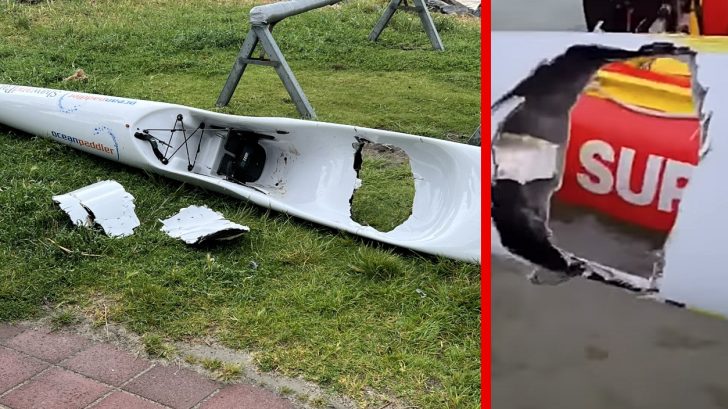 19-year-old Nathan Drummond narrowly escaped death after being launched into the air after a shark attacked his surf ski at the South Australian Ocean Paddlers event on Sunday (Oct 23).

“The shark just came up and hit me from beneath,” Nathan told 9 News Australia. “My ski just kind of lifted above the water, and then the next thing I knew I was in the air. Then I was in the water and I saw this figure just kind of fall back into the water—a big shark.”

The shark took a massive bite out of the athlete’s surf ski leaving a hole right under where the teen had his legs laying. The pictures and video of Drummond’s vessel left many onlookers and viewers shocked that he even survived the attack.

Fortunately, when it happened, paddlers who were close to him quickly paddled over to his aid while he swam to them. They helped pull him onto their vessels getting him out of the water and away from another potential attack.

“The paddlers in this wave and in particular those close to the attack should be commended for their quick actions in rescuing and generally doing what Surf Life Savers do best and that is responding to a situation. The support provided to Nat was first class and reduced the risk of anything else occurring,” South Australian Ocean and Surf Ski Paddlers wrote on Facebook.

Surf Life Saving South Australia’s Daniel Willetts said that it’s unclear what species of shark attacked him. However, the way that it happened and the bite on the surf ski indicates that it was probably a great white that attacked him.

Nathan, along with other surf skiers who were competing in the event at Seacliff Beach were advised to stop the race and get out of the water due to the shark attack. The event organizers said they will look at opportunities in the future to run another race and will notify paddlers accordingly.

You can view South Australian Ocean and Surf Ski Paddlers and Surf Life Saving SA’s full Facebook statement in the embedded post below.

Also, Video Interview With Nathan About The Scary Experience Below