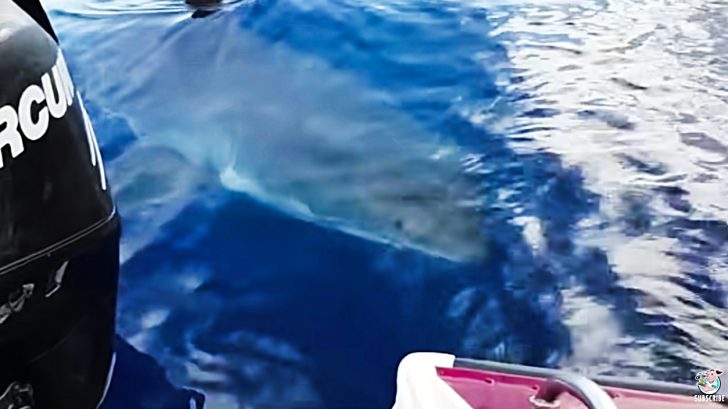 Three fishermen were floating around in their boat off the coast of Dawsville, Australia when a massive 18-foot great white shark began circling them.

The men shouted in astonishment of its size and nervously said to one other how they didn’t like the situation they were in. “He’s just sitting there, what the hell!?” one of the guys said. “Yeah, as long as he stays down there. He’s scoping us, mate,” the other guy answered.

“I couldn’t believe my eyes when myself and two mates encountered a large 6-meter white pointer while fishing 30 miles from Dawsville, Western Australia.” Lad Bible reported of the men saying.

The fishermen said the shark approached the back of the boat at first and they thought it was going to take a bite out of the propeller. The shark turned just before touching the boat and circled them three times while watching them closely before swimming directly under the boat. They were creeped out and decided to head back to shore and call it a day.

As of 2019, Australia is second in the world for unprovoked shark attacks with six bites occurring in New South Wales, four bites in Queensland, and one in Western Australia, totaling 11 shark attacks. America came in first with 41 shark attacks. Go ahead and watch the video below of the shark circling the fishermen and share with us what you think.

WARNING: Language May Not Be Suitable For All Listeners