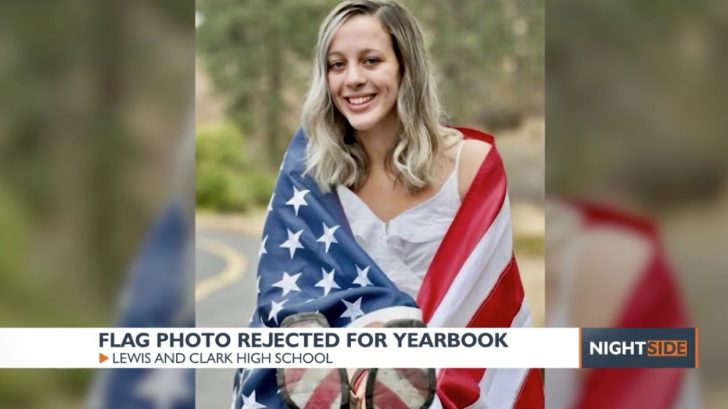 Sierra Athos, a 17-year-old from Spokane, Washington who goes to Lewis and Clark High School was told she can not pose with an American flag in the school’s yearbook this year.

According to Marybeth Smith, the principal of the school, the American flag violates the brand-new policy that was just put into effect this year which states “no props are allowed.”

“We have rejected a photo this year in which our American flag was displayed in a way not sanctioned by Title Four, US Code, Chapter One,” Smith wrote on the school’s Facebook page.

Sierra also took to Facebook to tell people how she felt about it and expressed she believes the school is violating her freedom of speech. Her brother and others have used props in the past and she thinks they change the policy this year due to politics.

The principal is expected to meet with Sierra and her parents to go over the new policy and Sierra says if she can’t use that picture, then she’s not going to submit another. Smith said the school does not have a ban on using the American flag as inclusion in photos but not as props.

“We do not and have not banned the American flag from inclusion in photos,” Smith added. “We respect our flag as much as any school in the area and were concerned that in the photo submitted it was being used as a prop in the photo and was not being afforded appropriate regard.”

KXLY interviewed Sierra. You can watch it here.

A note from our Principal, Quick point of clarification regarding senior pix. We do not and have not banned the…

Posted by Lewis and Clark High School on Wednesday, December 9, 2020