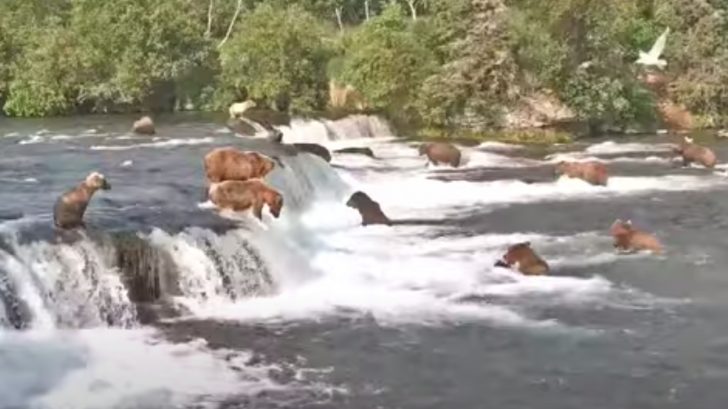 An incredible video shared by Explore Live Nature Cams showed a group of coastal brown bears gathered around a waterfall to cool off in the water and eating fatty, nutrient-rich salmon.

The footage was filmed at Alaska’s Brook Falls on Brooks River by a live webcam that looks over the waterfall. The bears typically congregate here to snack on the salmon that are trying to swim up the river.

In the video, 17 different brown bears can be seen happily fishing in the same area together as birds also gathered around with them in hopes of snatching some leftovers floating downstream from the bears.

The fascinating video is two hours long and will certainly have you glued to the screen.

According to the Alaska Department of Fish & Game, there are five species of Salmon in Alaska – CoHo, Sockeye, Pink, Chinook, and Chum.

Alaska’s Katmai National Park is famously known for being the best place to watch the bears fish for salmon and their diets mainly consist of CoHo and Sockeye salmon.

The salmon is actually the reason why brown bears are bigger than grizzly bears. Grizzly bears have a diet of mainly eating plants, berries, nuts, worms, moths, beetles grub, and ants.

They occasionally eat fish and grow to weigh 800 pounds, but that’s nothing compared to a coastal brown bear that weighs upwards of 1,200 pounds due to eating salmon.

Most of the time, the bears hang out in the shallows to catch their salmon but they’re also known to dive deep into the river to fish for them underwater. Take a look at some wild footage of a mama bear diving for salmon to feed her cubs in the video below.